Google has released two sets of open source templates to help developers create web sites that will work well with Google TV products. They use standard web technologies based on HTML5, JavaScript and CSS, or optionally Flash. A user interface library has also been released to assist with the development of web sites that can be navigated with a remote control.

The templates are designed to deliver video but are equally suitable for photos or other multimedia. Two sets of templates are provided. One is based on open web technologies. Designed specifically for Google TV, it does not seem to be compatible across all browsers but interestingly it does appear to work reasonably well on an Apple iPad. The other uses Flash and requires Flash Player 10.2, which is currently a release candidate version.

Both sets of templates represent useful starting points for developers. They have been released as open source under the Apache 2 licence, so developers can modify and customise them to meet their needs. 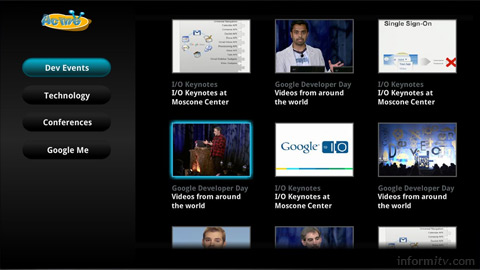 When Google TV first launched with partners Sony and Logitech, it seemed that Google had done little to prepare the market, beyond releasing some guides on how to optimise web sites for display on television.

These new templates will allow developers to deliver video, with full keyboard navigation and playback controls. They may also be useful for developers wishing to target other browser-based connected television platforms. However, many may be waiting to deploy full Google TV applications through the Android Market.

As usual with Google, the company is taking a code-driven approach in an attempt to attract developers. The templates do not reflect any attention to visual design. It is telling that the placeholder media are drawn from application developer events. The video images are not in 16:9 format, although the video is and Google TV assumes a high-definition display. Still, that can be easily fixed. What is worrying is that Google appears to be approaching the television screen through the lens of engineers rather than as an engaging entertainment experience.

Google wandered into the living room with little apparent appreciation for television and still seems precociously preoccupied with coding rather than building relationships. It is not clear that these templates will be enough to persuade networks like ABC, CBS, NBC and Fox to allow Google TV products to access their online video services.

With the number of projects that Google is pursuing, it is not evident that television has its full corporate attention. That said, informitv expects to see continuous enhancement and extension of the Google TV proposition and its open nature will encourage third parties to use it as a platform on which to build products and services.