Freesat, a new free-to-air satellite television service, is due to launch in the United Kingdom in early May. Modelled on the successful Freeview digital terrestrial television platform, it will offer the main terrestrial channels and the new BBC HD high-definition service. Receivers will go on sale in high street shops, compatible with existing satellite dishes, representing a threat to subscription services from Sky.

Backed by the BBC and ITV as a joint venture, Freesat does not require a monthly subscription, just a one-off payment for a receiver, and a satellite dish and installation if required, as it will generally be compatible with existing Sky dishes.

Freesat will include support for high-definition television, initially offering the BBC HD channel. The BBC will offer a range of red button interactive services on Freesat. From launch these will include its digital text service. Multistream sports coverage will be available for the Beijing Olympics in the summer.

The channels themselves are already available unencrypted on satellite, but they are conveniently packaged by Sky through its electronic programme guide, along with premium programming only available to subscribers.

The Freesat service will have its own electronic programme guide, enabling a range of receivers, including digital video recorders, from third-party suppliers to be sold at retail. 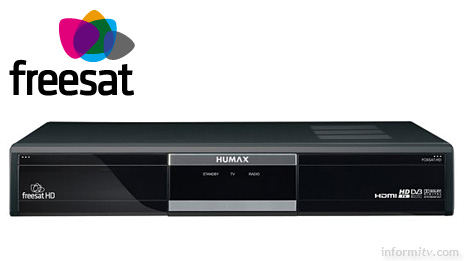 This horizontal market, as opposed to a vertically integrated market from a single provider such as Sky, has proved popular with Freeview. In effect, Freesat and Freeview simply provide marketing services and ensure that products conform to certain requirements in order to carry the brand.

It has been possible to view the free-to-air channels with any compatible satellite receiver. Hauppauge sent informitv a USB device that works with laptop that you can connect to a satellite dish. Freesat points out that only those devices carrying their logo are guaranteed to be compatible.

Freesat will be available across the United Kingdom, with 98% of homes within its satellite footprint. It is an important component of the plans for digital switchover, since even when analogue signals are switched off, digital television will not be universally available through a conventional aerial.

Freesat represents a threat to Sky in the event that some viewers cancel their subscriptions to buy a box for a one-off payment. Sky can be expected to respond with strong marketing of its own services, with packages priced to retain subscribers. It could even take advantage of the promotion of Freesat to attract new customers, not only to its television offering, but also for broadband and telephone services.

Sky already markets a non subscription package of over 200 channels as “Freesat from Sky” with the ability to upgrade to any Sky package over the phone.

Nevertheless, the importance of the launch of Freesat backed by the BBC and ITV, with the promise of free high-definition channels, should not be underestimated. In five years from launch, Freeview went from rescuing the previous failed digital terrestrial platform to overtaking Sky as the most popular digital television service.