Sky has launched its Sky Glass television, integrating an online service in a screen with no need for a separate box or satellite dish. Sky is offering it in small, medium, and large sizes, for a one-off purchase or monthly instalments, in the hope of capturing customers. It is an innovation in business model as much as redefining the concept of the smart television.

As previously suggested by informitv, Sky has ditched the dish and the set-top box, in favour of integrating its services, delivered online, in a television. It is 4K and supports high dynamic range video and Dolby Atmos audio.

Speaking at the launch in London, Dana Strong, the group chief executive of Sky said: “Sky Glass is the streaming TV with Sky inside, providing the total integration of hardware, software and content. Built on over 30 years of understanding what our customers want, this is a TV that only Sky could make. We believe this is the smartest TV available, and that customers will love it.” 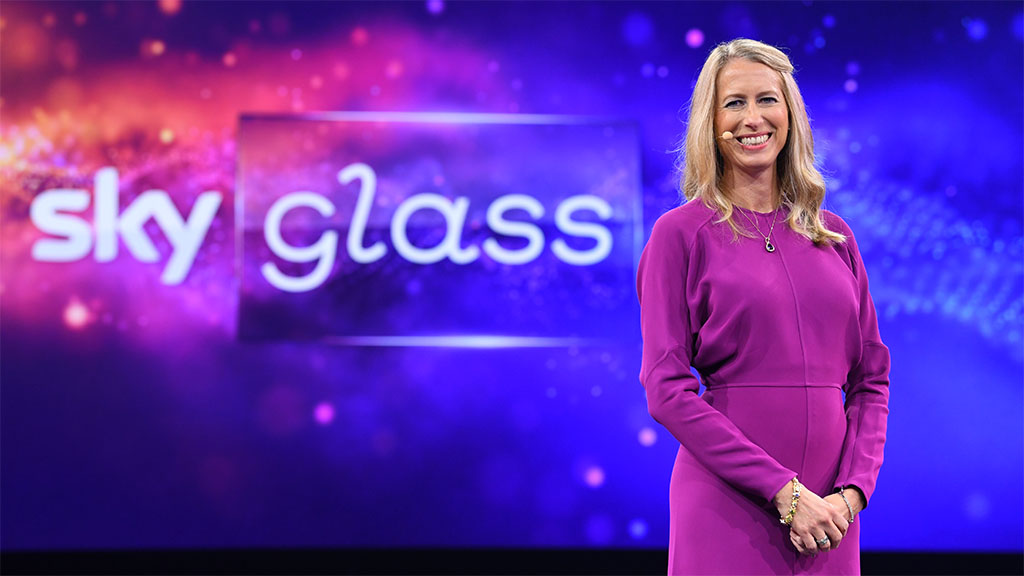 In a world of ever thinner screens, Sky Glass is rather different. The boxy display is 47 mm deep, incorporating five speakers and a subwoofer for superior sound. It is designed to sit on a stand or be mounted directly to a wall. 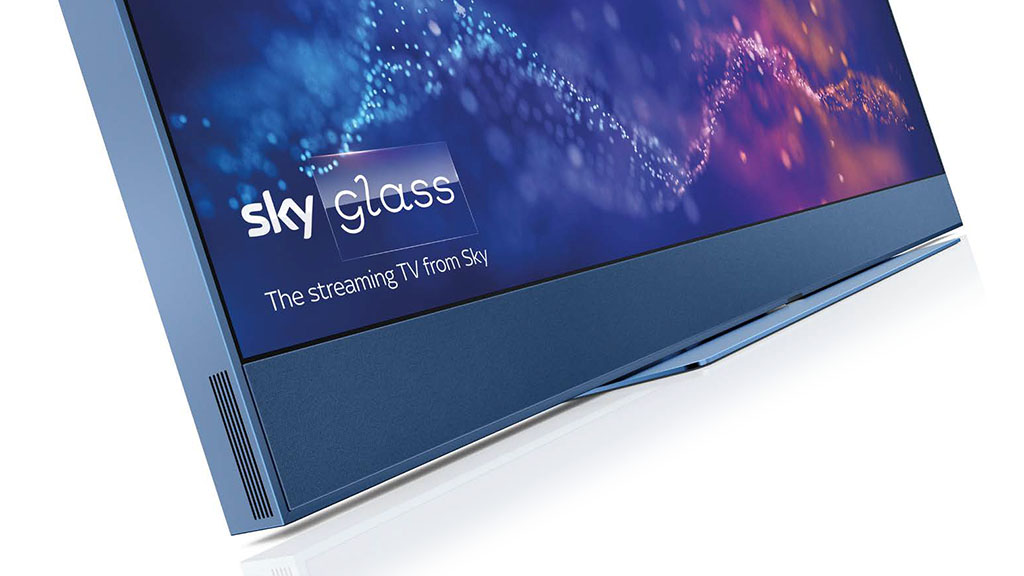 All it requires is a mains power connection, although a network cable and a terrestrial antenna can be connected as an option.

Sky Glass comes in a range of colours, dusky pink, racing green, and ocean blue, as well as black or white, with customisable fascias. 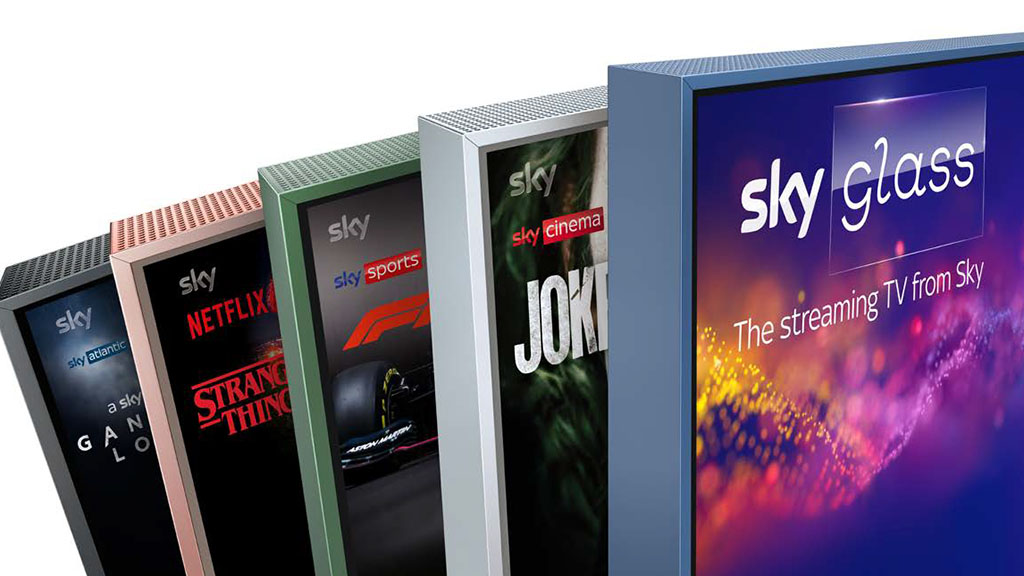 The industrial design places the emphasis on industrial. It would not look out of place in a school, hospital, or television facility. The red, green, and blue colour references are original, although there may not be much call for all of them, especially the army khaki and the airforce blue versions.

There is a voice-enabled remote control in matching colours, with slightly fewer buttons than previous Sky remotes. Channel up and down, and rewind and fast forward, are now integrated on the directional pad. The colour-coded shortcut functions are under a single button.

However, customers will also need to pay £26 a month for Sky Ultimate TV, and a further £5 a month for the benefit of high dynamic range and Dolby Atmos sound. Sky Sports is another £25 a month, Sky Cinema is another £11, and Sky Kids is £5 monthly. Then there is the cost of any of the integrated services, including BT Sport, Netflix, Amazon, Disney+, or Spotify. And then there is the cost of broadband. 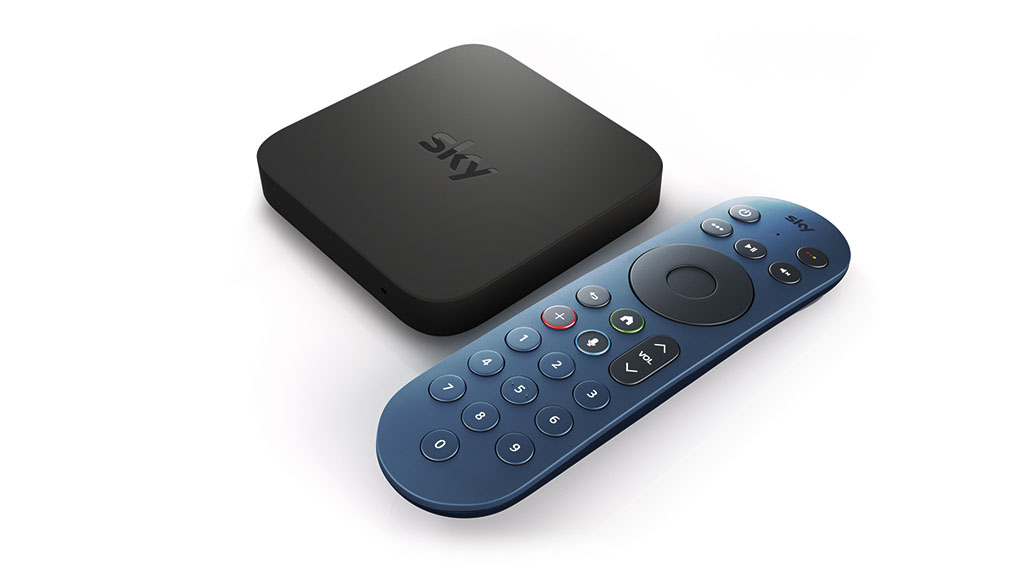 Users can add Sky services to up to six existing screens with a wireless Sky Stream Puck, which is a little smaller than an Apple TV. It includes a terrestrial tuner, although that will not be activated for the United Kingdom. These cost £50 each but it is an additional £10 a month to use one.

Without any subscriptions, customers will be left with a large monitor, with 3 HDMI ports. There is a single terrestrial tuner, which is described as for back up, but this clearly requires an antenna connection.

There is currently no recording facility, which has been integral to the Sky experience for the last twenty years. Instead, users can add a programme to a playlist, from where it will be available, either from Sky or one of its programming partners.

There is a motion detector built into the display that will allow it to go to sleep or wake up and show suggestions of what to watch, or potentially display artwork, news, sport, or weather information.

There will be a companion camera, to be launched in 2022, which will offer integrated chat and social features. That also has a rather functional appearance, with a curiously offset lens, without a privacy cover. 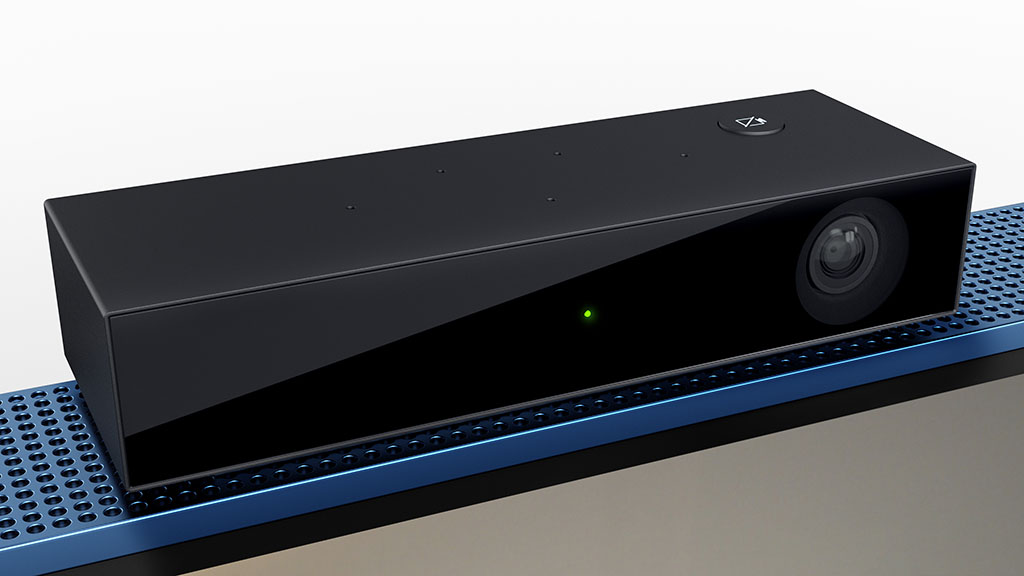 Sky is addressing multiple problems by integrating its software into the television hardware, which in turn simplifies life for subscribers. It simplifies installation and connection, while ensuring a consistent quality of experience.

Whether consumers will be satisfied with a choice of small, medium, or large from a single manufacturer remains open to question.

The quantum dot display panel itself comes from the Chinese manufacturer TPV Technology, which owns TP Vision and now produces televisions under the Philips brand, among others.

Sky says that Sky Glass will be the only television with Sky inside. That counts out market leaders like Samsung and LG, which between them are responsible for one in two televisions sold worldwide.

Around 8 million televisions were sold in the United Kingdom in 2020, a figure boosted as people spent more time in their homes during the pandemic.

Sky has over 8 million satellite television subscribers in the United Kingdom, although it can claim over 23 million customer relationships across Europe.

Around 60% of Sky television homes in the United Kingdom currently have the Sky Q service, which will continue to be available, although Sky is now positioning Sky Glass as its premium product.

Sky is clearly hoping to emulate the model of mobile phones, with periodic updates encouraging people to upgrade their screen more frequently. They are also hoping to lock customers in for the long-term through the subscription model.

Sky, which is owned by Comcast, is also hoping to licence the technology to other service providers. Foxtel in Australia is the first global partner for Sky Glass, but it is not expected to be available there until late 2023. It is likely to offer the Foxtel online video services Kayo, Binge and Flash, as well as applications from other partners.

Patrick Delany, the group chief executive of Foxtel, said: “It allows us to join a global product and technology roadmap created by Sky and Comcast, offering customers a world-class entertainment experience and devices, powered by Comcast’s global technology platform”.

Sky Glass is a bold initiative from the company that has been a pioneer in satellite television, the transition to digital television, digital video recorders, high definition and more recently ultra-high-definition. Packaging their product in the screen on which it will be seen seems like an obvious development, which has long been anticipated. Time will tell whether it is a smart television move.