Sky is reported to be testing a new Sky Q box for the United Kingdom market that will deliver the service over broadband, without the need for a satellite dish or cable connection. It follows the launch of such a service in Europe, over four years after it was first proposed.

Sky originally announced plans for a television service delivered over broadband back in early 2017.

“We’re planning to launch our Sky TV service without the need for a satellite dish for the very first time, giving millions more homes the chance to enjoy TV with Sky Q,” Stephen van Rooyen, the then chief executive of Sky UK, now also responsible for the UK and Europe, announced on 27 January 2017.

It was originally due to launch in the United Kingdom in 2018 and has since been launched in Italy, Austria and most recently in Germany.

The German service does not require a cable or satellite connection and can be used with any broadband service provider with a connection of 6 megabits per second or higher.

The diminutive device is the size of other online video boxes, including those for the NOW service from Sky, or competing products from Apple or Amazon. 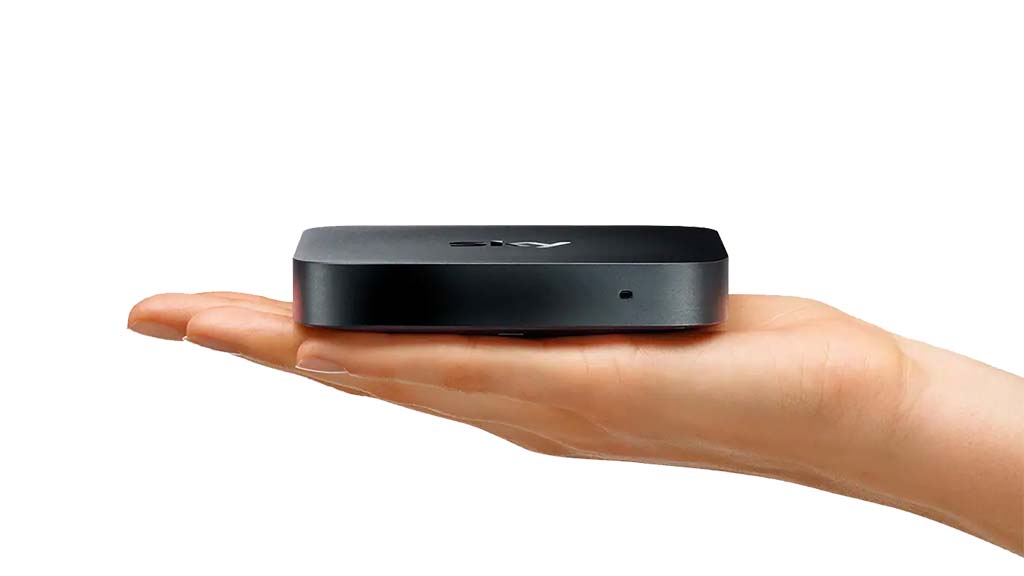 The service in Germany starts at €12.50 a month with an annual subscription for just free-to-air channels.

Most of the channels are available in high definition but not currently ultra-high definition, although the hardware is apparently capable of supporting this. There is no facility to record programmes, but it is possible to watch on up to three different devices at the same time. It integrates with services from Netflix, Amazon, Disney+, YouTube, DAZN, and Spotify.

The Sunday Express reports that Sky is testing a similar box in the United Kingdom with customers around the country. It suggests that it will support ultra-high definition for an additional monthly fee. Its source suggests that the new Sky box will include 1,000 hours of cloud recording, and the ability to pause and rewind live television. Pricing is likely to be similar to that for the satellite service. No launch date in the United Kingdom has been announced.