There will be around 925 million broadband subscribers worldwide by the end of 2018, up from around 650 million at the beginning of 2013. The forecast is lower than previously predicted, as growth rates decline in the United States, China and Japan. It now seems less likely that there will be more than a billion subscribers by the end of the decade. Nevertheless, it represents a massive global addressable market for online video services.

The latest five-year forecast from Point Topic shows that while broadband growth is expected to remain fairly constant globally, there will be a dramatic 60% rise in subscriptions in South and East Asia, which will have 40% of all broadband subscribers by the end of 2018, up from 34% in mid-2013. 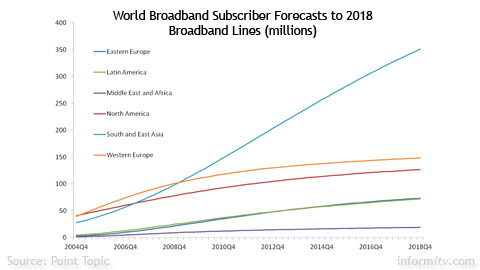 Western Europe is expected to have the lowest growth rate, at 12% over the five-year period. 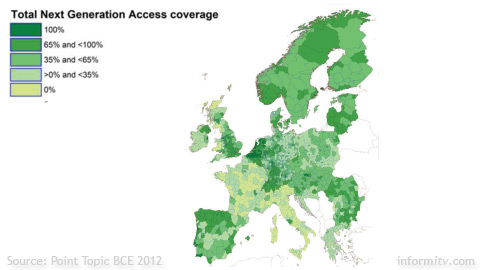 From the map it is readily apparent that the future of broadband network access is not evenly distributed across Europe. The Netherlands and the low countries are well served, while France has relatively poor coverage outside the major cities, despite being a leading country for IPTV. 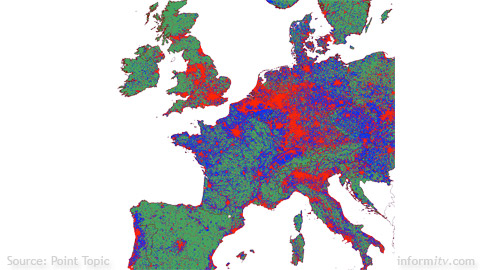 Point Topic has developed mapping tools that enable broadband density and demand to be projected across Europe at a resolution of a one-kilometre grid.

The research firm forecasts that most of Europe will still be getting broadband over copper telephone lines by 2020 and that fibre will stop some way short of most doorsteps.

Oliver Johnson, the chief executive of Point Topic will be presenting at The Broadband World Forum in Amsterdam, 22-24 October 2013.