Global internet protocol traffic will increase by four times from 2009 to 2014. Cisco forecasts that the biggest single component of that will be internet video, overtaking peer-to-peer file sharing as the biggest single usage of bandwidth by the end of 2010. The combination of all forms of video will continue to exceed 90% of all global consumer internet traffic and by 2014 nearly half of it will be high-definition video.

Internet video to the television display will grow from just over 0.1 exabyte a month in 2009 to over 4 exabytes a month in 2014, an increase of 38 times. 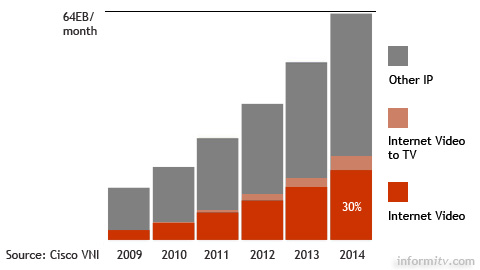 In the United States, the volume of internet video data will continue to increase, but the rate of growth will slow, rising by 5 times over the period to 3.9 exabytes a month.

In the United Kingdom, internet video data will increase by 12 times, to over 1 exabyte a month, accounting for 37% of all internet traffic

An Exabyte is a million times larger than a terabyte and is equivalent to the data on around 250 million DVDs.

Cisco observes that the trends in internet traffic are being driven by video and social networking, which it terms visual networking.

The statistics are provided in an interactive online tool from Cisco, known as the Visual Networking Index Global Forecast. The model is derived from projections from a variety of well-known independent analyst firms, combined with traffic data obtained from service provider customers.