The BBC iPlayer has been updated to improve personalisation. There are also plans to link to third-party social networks, including Facebook, Twitter and Microsoft, and more controversially to link to programmes from commercial public service broadcasters. Support has been added for the Apple iPad but it fails to make the most of the experience and users are still unable to access video on the rest of the BBC web site.

Erik Huggers, the BBC director of future media and technology, said the aim of the updated BBC iPlayer was to make it “more simple, personal and connected”. 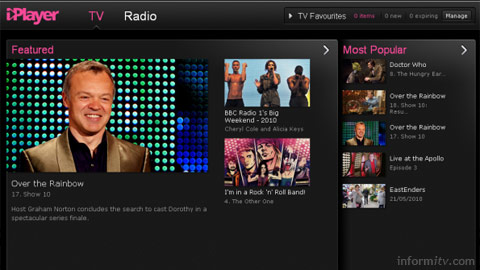 Radio and television programmes, previously brought together, will now be separated. There is improved personalisation. Users with a BBC iD login will be able to store favourites and other personal preferences and roam between different devices. The desktop client will allow the booking of programmes in advance to download automatically, in some case before they air, making them immediately available after transmission.

Links to social networking sites such as Facebook and Twitter will enable users to comment on and recommend programmes to friends. A partnership is also planned with Microsoft Windows Live Messenger, which could be extended to other instant messaging services.

Also planned are links to programmes from other public service broadcasters: ITV, Channel Four, Five, as well as the SeeSaw service from Arqiva — all partners in the proposed Project Canvas joint venture.

The BBC is keen to point out that these “metadata partnerships” do not involve “any sharing of technology or syndication of content”.

On one hand this is exactly how the web should work and demonstrates that there is no need to create joint venture vehicles in order to form strategic partnerships.

On the other hand some see it as a form of aggregation that could distort the dynamics of the nascent market for online video programming.

Sky immediately criticised the plans by the BBC, saying “We don’t believe it’s for the BBC to reinvent iPlayer as an online aggregator of third-party content without appropriate regulatory review”.

As far as Erik Huggers is concerned, the BBC is setting “clear boundaries” on its activities, rather than attempting to add its own social networking features. “Through a greater emphasis on strategic partnerships, we can harness the benefits of the web to enrich the audience’s interaction with our content and support other content providers. The new BBC iPlayer reflects public service broadcasting in the digital era.”

The BBC Trust has concluded that the BBC iPlayer has fulfilled its expectations. The response to its public consultation was “overwhelmingly positive” although there were some complaints about the use of Adobe Flash. A BBC survey estimates that a third of adults in the country claim to have used the service, rising to 43% among those that use the internet.

The Trust has launched a new consultation on proposals by the BBC to change its syndication policy. It has invited informitv to comment on the proposals and submissions are welcome from those with relevant concerns.

Specifically, the BBC proposes that “The BBC catalogue of full programmes should not be made available in a disintermediated way but instead under appropriate BBC brands”. It further proposes to “Endorse BBC control of syndicated products through the release of a coherent set of standard versions and prohibit self-build by third parties”.

In effect, the BBC aims to aggregate links to programmes of other public service broadcasters while not allowing third parties to include selected programmes as part of a separate proposition.

The BBC argues that this is about protecting the quality and coherence of the user experience. Others have suggested that it is unnecessarily restrictive and that the BBC should simply make its programmes available on appropriate terms to ensure any necessary protection of rights, without imposing particular technologies or other constraints.

Diane Coyle of the BBC Trust said “The BBC has a duty to consider carefully the impact of its activities on the wider industry. We hope to learn more about what audiences and the industry think about on-demand syndication in the forthcoming consultation.”

The BBC Trust previously rejected plans to link to the online services of other public service broadcasters as part of a partnership programme called Project Marquee. When giving its original approval to the BBC iPlayer the Trust had said it was inappropriate to allow access to the iPlayer to third parties.

The BBC says it is not aggregating content but simply linking to other sites. The distinction may be difficult to sustain in terms of potential market impact. The significance is not so much for iPlayer on the web but for network connected television devices and displays, such as the proposed platform envisaged by Project Canvas.

The launch of the Apple iPad in the United Kingdom exemplifies the issues the BBC faces in supporting new platforms as a result of its own policies and an apparent insistence on controlling the look and feel of the service on different devices. 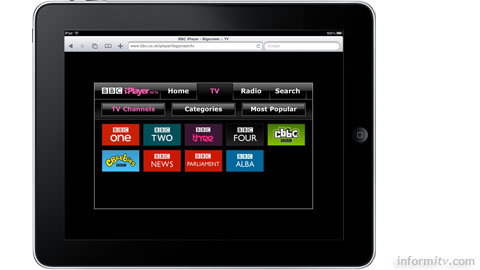 The Apple iPad does not support Adobe Flash, which the BBC favours for its online video services. The BBC previously created a special web service for the iPhone and iPod Touch that uses standard H.264 MP4 video and does not require Flash. This demonstrates that the BBC is able to offer its iPlayer programming without dependencies on Flash, using standard media formats.

The BBC has similarly adopted its “bigscreen” web service designed for television devices and displays to create a usable experience on the iPad. Unfortunately, the user experience of the iPlayer on the iPad is far from optimal, as noted by some of the comments on the BBC web site. No doubt the BBC could have produced an optimised application for the iPad, as other media organisations have, but it has been prevented from doing so at the instruction of the BBC Trust as a result of pressure from commercial interests.

Meanwhile, users of the BBC web site are unable to view other videos on an Apple iPhone, iPod Touch and iPad and are instead instructed to download the correct version of Flash, which is unavailable for the device. 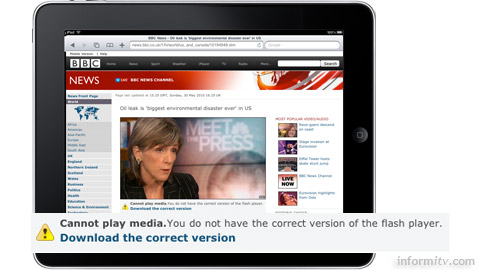 The adoption of Flash for the primary media player across the BBC web site demonstrates the difficulties of dealing with proprietary standards.

Some media brands are embracing open standards that could allow audio and video to be played back without plug-ins. This has some issues, not least with respect to managing security. However, some might suggest that providing open access to news, sport and weather video should lie at the heart of the public purpose of the BBC and should be considered as a priority.

As some have argued on the BBC web site, rather than attempting to develop and support different versions of its media player for different devices and platforms, the BBC is well placed to encode its programming in a limited number of suitable standards and formats and simply make the media available to those devices and displays that support them, subject to appropriate terms and conditions.

The BBC iPlayer is a world class service, but this is largely as a result of the quality of its programming proposition, free of advertising or other commercial considerations, as much as the technical excellence of its execution.

Whether the BBC should be developing products for particular devices, or integrating with commercial platforms, remains open to question.