The National Association of Broadcasters convention in Las Vegas was overshadowed by the significant structural changes facing the television industry. Yet despite the dazzling display of digital technology on show, there is still apparent complacency about the end of analogue transmissions.

The traditional analogue television system that has served America for over fifty years will cease on 17 February 2009, at which point millions of receivers across the United States will lose their broadcast television signal.

One might imagine that this topic would dominate conversation at the annual convention of the National Association of Broadcasters, which represents the interests of television stations across America. However, the current level of preparation seems inadequate.

Some 1,500 of the 1,700 or so television stations in the United States already broadcast digital signals. The United States Congress has allocated $1.5 billion for $40 coupons to subsidise homes that will need to buy digital set-top boxes.

The NAB has produced a web site and a leaflet that explains that nearly 20 million homes in America currently rely exclusively on over-the-air signals to receive television. As yet there are few converter boxes on the market and public awareness is low.

David Rehr, the president and chief executive of the NAB, in a session with representatives of the Federal Communications Commission, asked what they were doing to ensure a smooth transition to digital television. 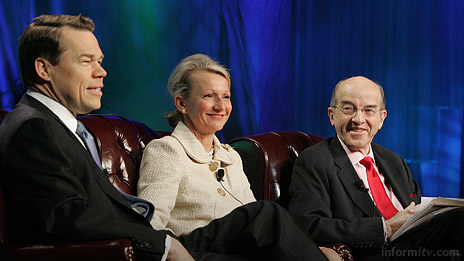 Commissioner Michael Copps admitted that the transition was “a stealth process” compared to preparations for the year 2000 problem, while Deborah Taylor Tate joked that perhaps the United States “could subcontract with Britain to help us out here”.

There was little on the show floor to suggest that television was anything but digital already, with high-definition once again a major theme. The demonstration of the Japanese Ultra-HDTV system showed that there is still considerable room for improvement in current video technology.

Computer-based systems are putting incredible power in the hands of producers, distributors and consumers at increasingly cost-effective price points.

There was also much emphasis on new delivery methods, such as mobile and internet protocol television. The conference sessions on these topics were disappointing, as they were last year, with very little substance. What was clear, however, was a concentration on commercial realities.

A key concern was the business model for conventional commercial channels, which despite the overwhelming adoption of pay-television in North America, remain reliant on revenue from advertising. 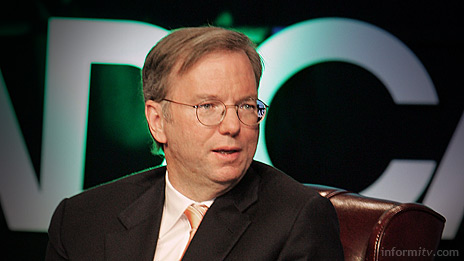 Google was a significant presence, which would have been unthinkable a few years ago. Eric Schmidt, its chief executive, said that “people who are using litigation to prevent change are betting against the internet”. He indicated that “figuring out how to get your content onto mobile devices is the next big challenge”.

It seems that many of the conventional broadcasters that are represented by NAB are trapped in their traditional thinking. While the major networks are experimenting with new forms of digital distribution, their local affiliates are still stranded in their original model.

One station owner proposed a dongle device that might allow him to deliver his signal over the internet to users only within his designated market area.

He was sitting next to Blake Krikorian, who heads Sling Media, whose inexpensive boxes allow video to be delivered from the home to anywhere in the world. Although there were many individual advocates for the Slingbox, some could not conceive how it could be compliant with their existing distribution agreements. 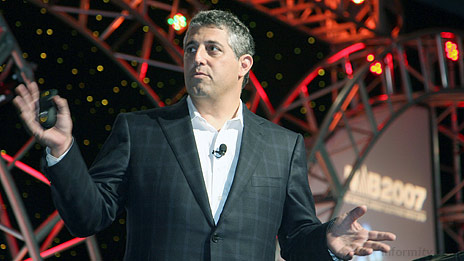 Ironically, Tom Rogers, the new chief executive of TiVo, was warmly welcomed in his keynote address. This included a showreel that showed a mastery of product placement and celebrity endorsement that has made TiVo a household name, a noun and verb that is almost synonymous with the digital video recorder in the United States. Advertisers are now coming to terms with the impact of such devices and are even beginning to benefit from more measurable results. 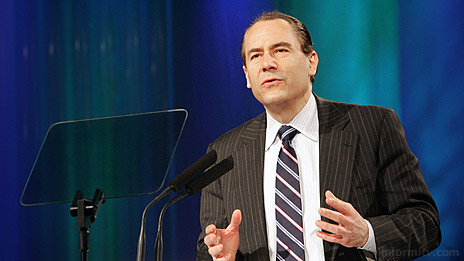 In time, products such as the Slingbox may become similarly accepted as they mature from the margins into the mainstream and no doubt eventually become a standard feature of distribution networks.

Broadcasters will no longer be privileged by their monopoly on a medium of distribution. Their real strength will always lie in their programming and it is on that which they will be judged by the public.

Despite the democratisation of digital media production, distribution and consumption, there will still be a place to profit from creating compelling programming, but there is no room for complacency.