With the outcome of the US election hanging by a chad, viewers of the EchoStar DISH Network have been able to watch a multiscreen mosaic featuring coverage of the campaign, with rival networks CNN and Fox News side by side on a single screen. According to a poll of viewers indicating their voting intentions by text message, Senator John Kerry was slightly in the lead on the eve of election night.

The satellite television service teamed up with six networks to offer simultaneous coverage from CNN, Fox News, CSPAN and MSNBC, with additional expert analysis from MTV and Comedy Central. 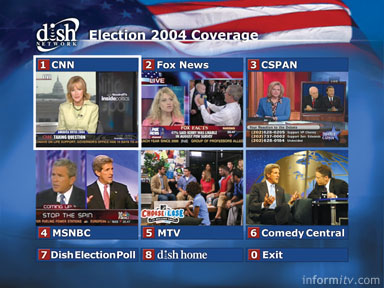 EchoStar said they were providing a variety of election coverage to meet the needs of a diverse audience, citing a programming executive, apparently without irony: “We have something for every viewer, including traditional up-to-the-minute election returns and analysis, an in-depth look at the election issues most affecting the younger generation, and a channel offering a humorous side of the elections.”

Viewers can monitor the six networks on a single screen and select a channel to view in normal full-screen format.

It’s said to be the first use of such a multiscreen application for election coverage in the United States. The application was built by OpenTV and is very similar to that used for the network’s Olympics showcase service.

Although unambitious in scope, EchoStar’s continuing commitment to the mosaic approach is offering American viewers an introduction to interactive television, but more sophisticated propositions may be required to hold their attention.