The BBC is now providing what it terms the world’s first interactive television news bulletin. The Ten O’Clock News Extra service is available on digital satellite, terrestrial and cable television and offers added depth and context to the news, explaining the issues behind the events of the day.

The launch of the service has been timed to coincide with coverage of the US elections.

Viewers will be able to access more information on up to three of the stories in the news, including an additional video feed, by pressing the red button on their remote control.

The material will be provided by the Ten O’Clock News team and will be available from Monday to Friday during the bulletin and for a short period afterwards. 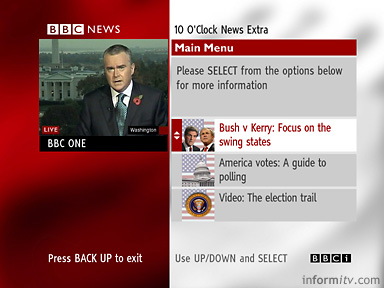 BBC Chairman Michael Grade has described it as an experiment, a toe in the water, saying “If it works out, it will mark a real breakthrough in the provision of public service news”.

“The world’s first interactive daily TV news bulletin is a very exciting initiative for BBC News,” said Richard Deverell, head of BBC News Interactive. “The service will provide extra choice for viewers and will help drive a new audience towards our interactive services.”

Kevin Bakhurst, editor of the Ten O’Clock News added “We are always looking for ways to provide added depth and context to the top news stories and this is the perfect way to do it.”

Of course, interactive news is nothing new, Sky has been offering News Active with multiple video streams for years, and the BBC itself already offers a comprehensive digital text service and looping headlines streams.

What is different here is the provision of context and depth for a lead story within a daily bulletin, a challenge that is well understood by editors and journalists.

The BBC has responded to this with nicely designed pages of supporting text and graphics, which look rather like sidebars in a news magazine, together with a longer background video loop. On the launch night of the US elections, this offered a perspective piece that felt somewhat less satisfactory as a package. 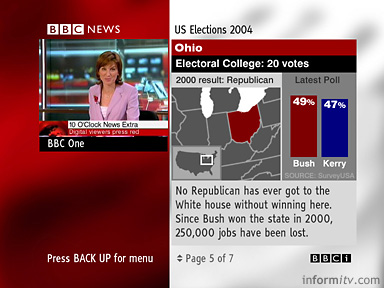 The intention of enhancing the BBC’s flagship evening news bulletin in this way is perhaps not only to offer greater depth to the news, but to encourage its audience to use interactive features, and so promote the continuously available interactive news services.

Ultimately, in a world of rolling news and on demand services, the very concept of a fixed time bulletin will no doubt change significantly, but at times of national interest, as with the American election, live television news will continue to offer an essential service.

It seems that the BBC has established an aesthetic for future interactive news bulletins to follow, and this is undoubtedly the first of many innovations to come.

The backend development required integration with the existing BBC News editorial systems, to allow journalists to change content right up to the transmission of the bulletin.

It is the first time that the BBC has outsourced the development of a project across all three interactive platforms and has been seen as a key test of the ability to work independent companies in this field.

Two Way TV’s chief executive Jean de Fougerolles commented: “We are delighted to play a key role in the BBC’s stated ambition to embrace the independent production sector, and this project has proved that companies like Two Way can successfully provide services into the BBC.”