Amazon is the latest service to add a feature to allow viewers to watch together. It essentially allows users to engage in text chats while watching videos in synchronisation but is currently limited to viewing in a desktop browser. Meanwhile, BT Sport has brought forward the release of its Watch Together feature, which allows audio and visual chat, while viewing live sport in an app.

Watch Party is being beta tested on Amazon Prime Video, although currently only available in the United States. It allows users to chat with up to 100 friends while they watch movies and television shows online together.

A host user can invite others to a Watch Party, providing they are Prime members. The host can they play, pause, skip and seek for the group, who can then chat in real time in text messages.

Watch Parties are currently restricted to desktop browsers, and that does not include Safari from Apple. Other devices such as Fire TV, smart TVs, game consoles, connected media players, mobile phones, and tablets are currently not supported.

Hulu is also testing a similar feature, also called Watch Party, for subscribers to its service. It is limited to up to eight participants in total, and to compatible web browsers, including Safari.

There is also an independent Netflix Party extension, which is limited to a Google Chrome plug-in. It allows users to stay in sync while watching anywhere remotely, providing they are entitled to view the programming in their region.

What all these features have in common is that they are limited to viewing in a browser and to text conversations.

However, rather more ambitious solutions are being tested elsewhere.

BT Sport has launched a Watch Together feature in its apps, powered by Sceenic, a start-up company based in London. This adds audio and video-based chat, allowing co-viewing of live sport.

BT Sport brought forward the release of the Watch Together feature to coincide with the restart of Premier League coverage after coronavirus restrictions, rather than waiting for the start of the next season. 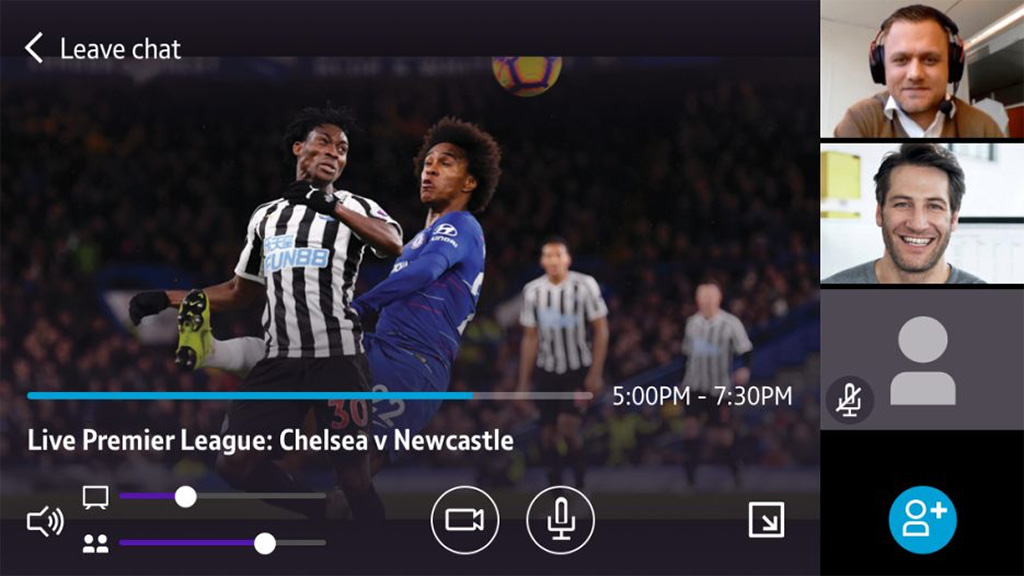 The Watch Together feature is currently only available on the BT Sport app on iOS and Android devices. At this stage it is not available on BT TV, Sky, TalkTalk or Virgin Media television platforms, and is not supported on Apple TV, NOW TV devices, Samsung smart televisions, or Microsoft Xbox or Sony PlayStation consoles

The challenge remains to enable viewers to watch programmes on their televisions, while synchronously sharing the experience with family and friends on other devices.