Online video platform TVCatchup will not be able to rely on a previous legal defence for streaming public service broadcasters programming without their permission. The Court of Justice of the European Union has ruled that United Kingdom law could not permit this. TVCatchup says that it will continue to offer a service with a greater choice of channels.

TVCatchUp provides an online service offering free access to channels that are available as free-to-air terrestrial transmissions. Commercial broadcasters ITV, Channel Four and Channel Five took the service to court, arguing that the platform was illegal under section 20 of the Copyright, Designs and Patents Act and infringed where a copyright broadcast is communicated to the public.

In its defence, TVCatchup argued that under section 73 of the act a wireless broadcast is not infringed it is retransmitted by cable within the area of initial broadcast.

The High Court agreed with TVCatchup, but the broadcasters took the case to the Court of Appeal, which stayed the case pending clarification from the Court of Justice of the European Union. 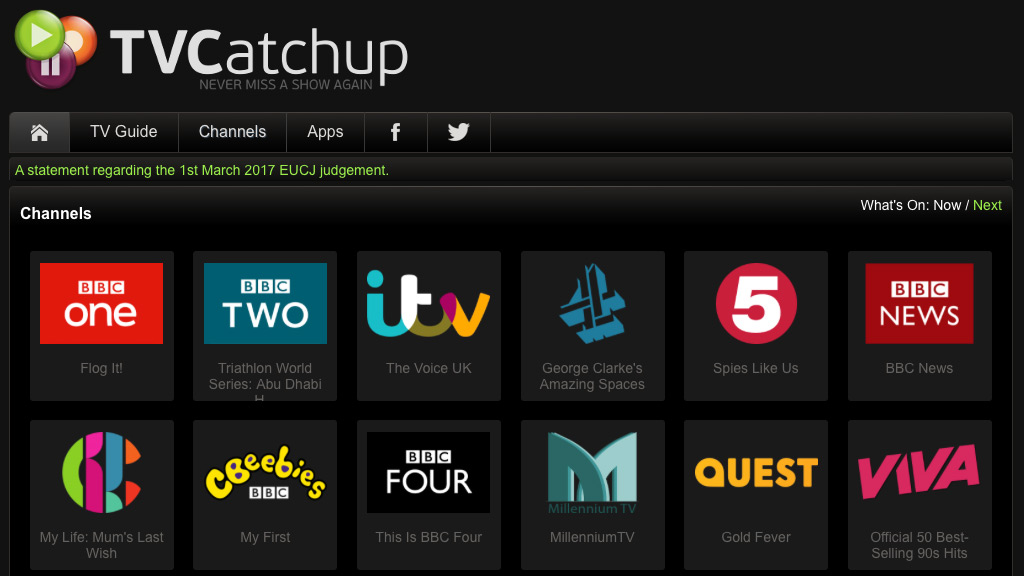 In its ruling, the European court determined that retransmission by means of an internet stream constitutes communication to the public. It ruled that the European Directive does not permit “national legislation which provides that copyright is not infringed in the case of immediate retransmission by cable, including, where relevant, via the internet, in the area of initial broadcast, of works broadcast on television channels subject to public service obligations.”

So not only does this remove a key defence for platforms like TVCatchup, it implies that this aspect of United Kingdom legislation is invalid.

Irrespective of its position with respect to Europe, the government is already seeking to remove section 73 provisions through its new Digital Economy Bill.

For its part, TVCatchup says it has “alternative technology allowing users to enjoy a far greater selection of entertainment than previously without infringing any copyright restrictions, so Section 73 is largely irrelevant to us in 2017.”

Following the European court ruling, TVCatchup was continuing to offer online access to programming from the five public service channels in the United Kingdom, as well as a number of other channels.

In a statement it said, “TVCatchup will not only remain available to users for many years to come, but with a forthcoming far greater choice of channels and many more ways and places to use the service that we pioneered.”

The judgement of the Court of Justice of the European Union in Case C‑275/15 was delivered on 1 March 2017.