The latest specification for digital terrestrial television in the United Kingdom lays the technical foundations for Freeview Play, the next generation of the free-to-air platform. It includes support for the recently released HbbTV 2.0 standard for hybrid broadcast broadband television. It also allows for video compressed using the more efficient HEVC encoding.

The Digital Television Group has published D-Book 8, the latest revision of the specifications for digital terrestrial television in the United Kingdom.

The latest version of the HbbTV specification was released in February. It includes provision for HTML5 applications and HEVC compressed video.

While there is no plan to broadcast services using HEVC on digital terrestrial television in the United Kingdom, the recommended support for HEVC-signalled services will give manufacturers an additional opportunity to extend product life as the platform evolves.

Over air signalling of software updates will allow manufacturers to instruct receivers to download software upgrades over broadband, or advise users to connect their products to receive the update.

Smart retuning ensures that products will retain favourite channel lists, region selection and recording schedules when the channel list is updated. There is also a requirement for manufacturers to provide an industry-agreed standard method for displaying signal strength and quality.

These features are intended to assist the retuning process likely to be necessary to manage the clearance of the 700MHz band for use by mobile services.

The D-Book 8 not only supports the Freeview and YouView platforms, it is also an essential reference for other UK platforms based on DVB-T and DVB-T2, such as EE TV, and is referenced by Freesat and the Freeview platforms in Australia and New Zealand. 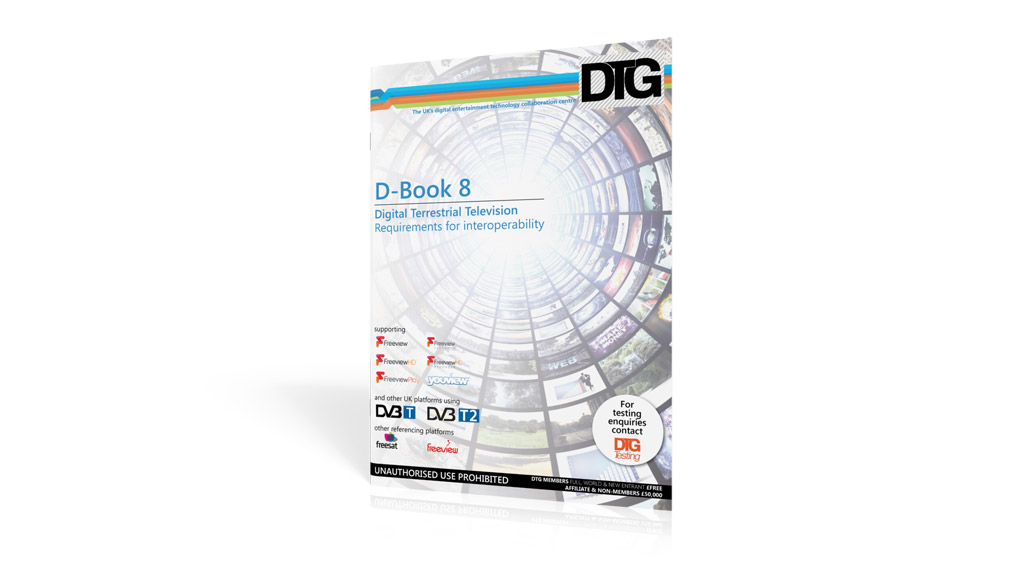 “The D-Book 8 is a milestone for digital terrestrial TV in the UK, laying the groundwork for a new generation of connected TVs and set-top boxes,” said Richard Lindsay-Davies, the chief executive of the DTG. “I’d like to thank the industry for its continued hard work on standards which will maintain the relevance of digital terrestrial TV to consumers through a changing spectrum environment and its evolution into a hybrid platform.”

Jonathan Thompson, the chief executive of Digital UK, said: “The DTG’s development of the D-Book has been essential to the success of the digital terrestrial television in the UK. As DTT evolves for the connected age and prepares for an era of increased spectrum sharing, this latest edition will ensure consumers choosing Freeview get the best possible viewing experience.”

The HbbTV Association anticipates that manufacturers, broadcasters, and operators will begin introducing a new generation of interactive broadcast and broadband TV services based on HbTV 2.0 in 2016, once the test suite is complete.

The HbbTV 2.0 specification is available for download from the HbbTV Association web site. The D-Book 8 is available free to members of the DTG.