Three free-to-air satellite television services have formed an alliance to promote the harmonisation of platforms across Europe. Freesat in the United Kingdom, Fransat from France and Tivùsat of Italy announced the FreeTV Alliance at the IBC show in Amsterdam. The alliance will produce common recommendations and specifications based on open standards for set-top boxes and smart televisions. They will also work together to establish preferred technologies for multiscreen services.

“Until now, the major free-to-view satellite TV operators have focussed on building a business within their national boundaries,” said Alberto Sigismondi, the chief executive of Tivùsat and the first chair of the FreeTV Alliance. “As the TV and consumer electronics industries become increasingly globalised, now is the right time for us to work together to ensure free-to-view satellite remains at the forefront of the television market.”

“The FreeTV Alliance’s priorities include providing concrete help, support and advice to manufacturers so they can more easily include satellite technology into their devices, which in turn will allow operators to offer an even more competitive service to consumers,” he continued. “We will be able to combine our collective resources to deliver the best customer experience whilst minimising costs to manufacturers and so act as a collective group to agree upon common standards and features.”

The chair of the alliance will pass annually between the heads of the founding member companies. 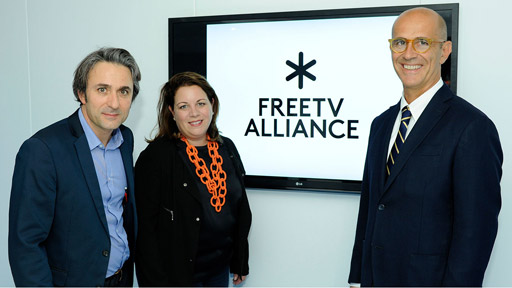 Freesat, headed by managing director Emma Scott, is a joint venture between the BBC and ITV. It is now used by around 1.85 million homes. Its Freetime guide is now available in both set-top boxes and smart televisions.

The initiative says it is open to other operators. The aim of the alliance is to standardise service and technologies and promote economies of scale. The alliance says that by producing common service approaches, open source specifications and established preferred technologies that work across all products in all markets, it will make it easier for manufacturers, retailers and service providers to meet the ever increasing viewer needs.

Many of these objectives might be met by existing open standards, such as HbbTV. There is still a need for collaboration on other aspects of services, such remote recording, potentially based on specifications already established by Freesat in the United Kingdom.

Freesat has been promoting its own Freetime programme guide and has partnered with SeaChange to allow other service providers to offer similar facilities.