The president and chief executive of the National Association of Broadcasters opened the NAB Show with a passionate plea for the power of broadcasting and a call for a National Broadcast Plan to match the existing National Broadband Plan. The chairman of the Federal Communications Commission responded by suggesting that broadcasters might use funds from selling off spectrum to invest in developing their business over broadband.

“Throughout the marketplace, we are beginning to see the incredible power of the convergence between broadcasting and broadband,” remarked the head of the NAB in his opening address. “A future that includes both is bright. Broadband, much like broadcast radio and television, is a game-changer, but the broadband and broadcast industries differ in our sources of motivation.” 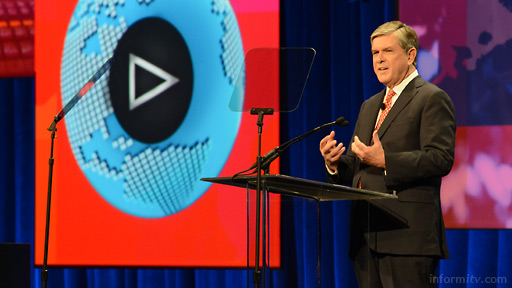 In a tour de force defence of local broadcasting, Gordon Smith rose to almost religious rhetoric: “We are here to be the public’s eyes and ears, to lead them out of darkness during times of crisis, to share profound moments, and to connect to our family, friends and neighbors. We are here to be the voices against oppression, and we are here to be the megaphones for freedom and democracy.”

The reality is more prosaic, plus all the latest sports, weather and traffic, after these messages.

As an advocacy group for American radio and television broadcasters, the NAB tends to confuse the medium of television with the mode of transmission.

Reflecting and representing local communities is undoubtedly important to broadcasters, but in practice, most people watching television in America are paying for cable or satellite services, rather than receiving free terrestrial transmissions.

Those that rely on terrestrial television are typically among those in rural communities, low-income areas, minorities and older age groups. Representing their interests is laudable but may not best serve the development of legacy broadcasting to embrace new technologies and approaches.

Much is made of the “efficient one-to-many architecture” of television as if it is a defining characteristic, rather than an inevitable feature of the mode of radiofrequency transmission, whether the signal is delivered from a tall tower, relayed from a satellite or carried over a cable.

Other forms of wireless transmission, including the latest cellular mobile standards, are also capable of one-to-many distribution, but they also enable one-to-one communication, which is arguably more empowering.

The internet is the defining communications technology of our age and has transformed the lives of those with fixed or mobile broadband access, for better or worse.

As the NAB observes, the Federal Communications Commission has made a massive investment in producing a National Broadband Plan to provide a roadmap for investment and innovation for the cable and wireless industries.

So the NAB is calling for a National Broadcast Plan, without really suggesting what it should deliver.

What is really needed is a new architecture for broadcast television, which embraces broadband and enables delivery to mobile receivers for mass audiences.

As the NAB executive recognises, “television broadcasting should seriously consider the challenges and opportunities of moving to a new standard. This would allow stations the flexibility and efficiency they need to innovate, to better serve their viewers, to compete in a mobile world and to find new revenue streams.”

The Advanced Television Systems Committee in America is already working on ATSC 2.0 and ATSC 3.0 standards to address these goals. The former is intended to be backwards compatible with existing standards, while the latter is more focussed on the future.

That is more than can be said for the equivalent DVB project in Europe, which is still concentrating on increasing transmission efficiency and going beyond high-definition, rather than a radical re-evaluation of the basis of delivery.

What appears to be lacking is a ‘vision’ for television that embraces and aligns the interests of both broadcast and broadband, recognising the future of terrestrial transmissions need to address mobile applications as much as fixed screens and fixed ideas about broadcasting based on legacy approaches.

The chairman of the FCC, Tom Wheeler, a former advocate for both the cable and wireless industries, came to Las Vegas to present his view the following day, in conversation with the NAB president. 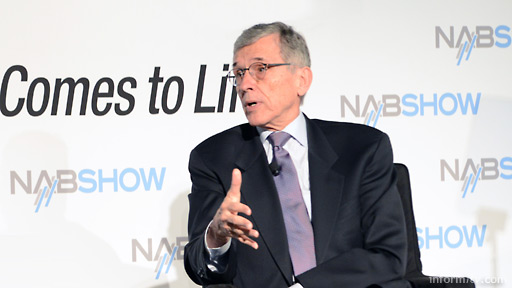 “I strongly believe that the interests of the American people are served by a vibrant broadcasting industry and include the continuation of broadcasting’s historic role as a principal conveyor of news and entertainment, and especially of its invaluable role as ‘first informer’.”

However, he suggested: “Broadcast licensees are no more in the ‘television’ business than a canal company was in the barge business” rather than “the ‘transportation’ business”.

He said that broadcasters could be the basis for a fixed and mobile service, combining compelling content and local programming with the means to promote it, at only incremental cost.

This offers an opportunity, he suggested, “to move from the ‘television’ business to the ‘information’ business.”

He warned that telecommunications companies AT&T and Verizon are reportedly looking at broadcasting over their new mobile networks. “They all are embracing something new that looks startlingly like your model.”

So-called incentive auctions will allow licensees to give up spectrum in exchange for a share of the proceeds from the sale to other operators. He said: “I continue to believe that the auction presents a terrific financial opportunity for broadcasters.”

Meanwhile, sharing spectrum with other broadcasters could allow stations to stay on air while using the proceeds from the auctions to develop new ‘over the top’ models based on fixed and mobile broadband.

“Spectrum sharing will allow you to maintain your existing business while taking home an auction check,” he said. “It is a once-in-a-lifetime, virtually risk-free opportunity to expand your business model on somebody else’s dime.”

Having been through one transition to digital television, he said the magnitude of the challenge should not be underestimated. “It’s going to be a long and heavy lift.”

“Great opportunities confront and challenge broadcast licensees,” he said. “Grasping any of these opportunities calls for entrepreneurial imagination and leadership. It requires a willingness to think anew and act anew.”

While the discourse of debate around the future of broadcast and broadband in the United States tends to be driven by lobbying for priority, there is a sense that broadcasters need to engage in transforming their traditional transmission business as a matter of priority. That sense may be lacking in other countries, where many people still rely on terrestrial television.