Sky is adding a ‘Buy & Keep’ option to its Sky Store, allowing connected Sky customers to buy movies as well as rent them, with the bonus of receiving a DVD in the mail a few days later. The option of a digital download backed up by a disc may appeal to those that still like the security, flexibility and collectability of a physical product. Sky customers account for around half of all DVD and Blu-ray purchases in the United Kingdom.

Unlike streaming services, the company has opted for progressive downloads of on-demand media to its Sky+HD boxes. Movies are generally available to watch within minutes and play back at consistent quality. The movie is available for customers to keep, regardless of whether they move house or change Sky boxes in the future, providing they retain their Sky+ subscription. Users can also free up storage space on their box and download the movie again at a later date. Customers also have the security of knowing they will receive a copy on disc, within 3-5 working days. 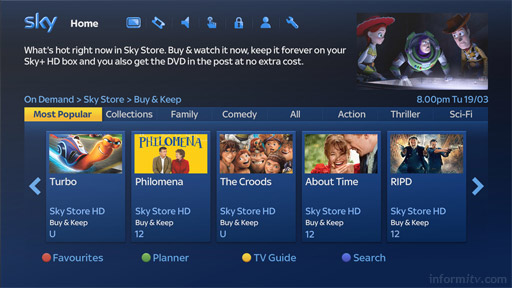 Nicola Bamford, the director of Sky Store, said: “The ability to now own a copy of your favourite film using ‘Buy & Keep’ is the perfect solution for any film fans wanting the immediacy of enjoying the latest movies on your main TV, with the added benefit of receiving the original DVD in the post.”

The service will launch at the end of May with ‘hundreds of titles’ and new movies available each week, with more to be added as deals are confirmed with studios.

As the service is extended over the year, customers will also be able to view their purchases on smartphones and tablets. In the future, TV box sets will also be available and Sky Store ‘Buy and Keep’ will be accessible to people even if they do not have Sky TV. Sky Store is currently available on personal computers, Now TV, Roku and YouView boxes, as well as Sky+HD boxes.

It is a variation of the UltraViolet model, promoted by the Digital Entertainment Content Ecosystem, combining the concept of a digital licence with a physical product.

Sky has relationships with all the major studios and is clearly determined to maintain its association with premium movies in the face of increasing competition from lower cost online video subscription services like Netflix and Amazon, or online retail services like Apple iTunes or blinkbox.

Sky justifiably claims to be the number one connected television platform in the United Kingdom, with 4.4 million homes now having access to its on-demand services through a Sky+HD box and a broadband connection.

The DVD market, although in decline, was still worth around £1.4 billion in the United Kingdom in 2013, according to the Entertainment Retailers Association. The shift to digital viewing more than offset a 6.8% fall in the sale of physical discs, reversing a five-year decline in total video sales, which grew 3.7%to £2.06 billion in 2013.