The TV Connect event in London, now in its tenth year, was as much about the future of online video as what may now been seen as traditional operator IPTV platforms. As services converge and diverge into multiscreen propositions, the common factor is simply internet protocol delivery, which now works well enough to be unremarkable. One of the companies that represent this new world of online television is Roku.

At the annual TV Connect Industry Awards, for which William Cooper of informitv was one of the judges, the lifetime achievement award went to Anthony Wood, the founder and chief executive of Roku. A pioneer of the digital video recorder, in the form of ReplayTV, he came up with the Roku concept while at Netflix. The Roku 3 box produced by his company was recognised as the best consumer device.

The award for best TV App went to Magine, which promotes itself as “TV as if it were invented today.”

Ericsson LTE Broadcast received the award for best television on the move service, while Alcatel-Lucent was recognised for its Cloud DVR.

Notable by their absence at these sort of events are the real giants, like Apple, Google, Samsung, LG, Sony, Amazon, Netflix, or even Microsoft, since it has sold its Mediaroom business to Ericsson.

In the conference, which featured keynotes from Pace, Huawei, UUX, Ericsson, the BBC and ZTE, Anthony Wood gave an insight into the success of Roku. 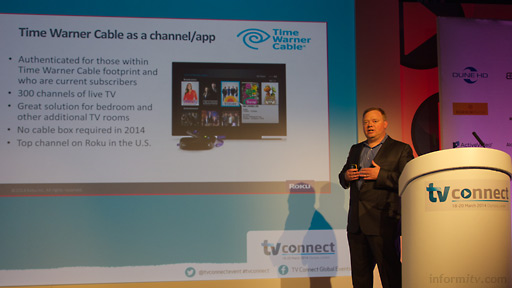 In many ways the Roku is an over the top set-top box, which is now by no means an original idea, but one that giant corporations like Google and Intel, even Apple, have yet to crack.

The Roku 3 is recognised as one of the best streaming players and has the widest range of entertainment services. Roku manages both to be a retail box that challenges traditional television services, while being embraced by operators like Sky and Time Warner Cable.

Not content with being another box to connect to the television, the Roku service is also available on a plug-in HDMI stick. 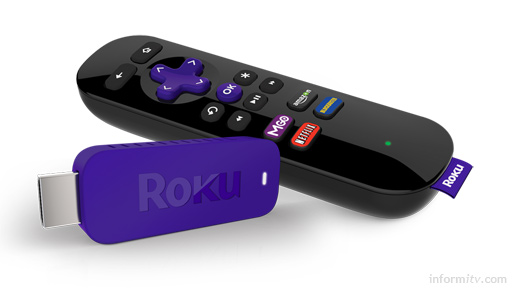 Roku is also being integrated in some televisions through a licenced reference design. 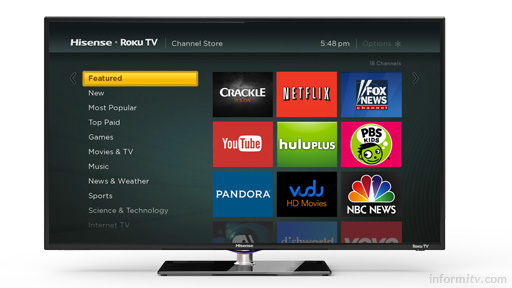 Around 8 million Roku devices have been sold in six years. In comparison, informitv estimates that around 10 million Apple in 2013.

The average customer apparently watches between 12-14 hours a week. Roku says a quarter of it customers use it for about 35 hours a week. For them it is effectively replacing television.

That implies streaming over 32 million hours a week to around 2.7 million active users, with around 680,000 using it about the same amount as the average American television viewer. That is still a small, although significant number.

One should not forget that there are now around 100 million homes worldwide subscribing to IPTV services, and that these represent around a tenth of pay-television homes.

Some service providers, like Time Warner Cable, have embraced Roku. Its complete channel package is available on Roku within its cable footprint. Anthony Wood said: “customers love it”. It increases their satisfaction and loyalty. Comcast has apparently been “one of the most resistant,” which could be significant if Comcast succeeds in acquiring Time Warner.

Sky has meanwhile invested in the company and offers a branded box for its NOW TV service, which it sells for under £10.

Asked whether in the future such a box would replace the DVR, which he pioneered, the chief executive of Roku was clear. “In the future it is going to replace DVRs. DVRs are a stepping stone into the world that people want. What customers want is to be able to watch anything ever made whenever they want to,” he said. “When that happens you don’t need a DVR any more.”

Next year TV Connect moves to a more modern venue at ExCeL in East London, reflecting the growing scale of the event, and takes place slightly later, at the end of April, after NAB.