Reed Hastings, the chief executive of Netflix, has called for stronger net neutrality to allow services like his to be delivered freely to broadband customers. While continuing to argue against toll charges on traffic, he acknowledged paying Comcast to provide a good experience for his customers and said “Netflix will in cases reluctantly pay” internet service providers to ensure “a high quality member experience”.

In a post on the Netflix web site, the co-founder of the company referred to what he called “strong net neutrality” as preventing internet service providers charging a toll for interconnection to companies like Netflix or intermediary carriers like Cogent, Akamai or Level 3 to deliver data requested by broadband subscribers.

While praising Cablevision as a provider, he said that performance had been constrained by others due to lack of sufficient interconnectivity. Cablevision, incidentally, is a member of the Netflix Open Connect initiative, which involves hosting Netflix storage servers on its network to reduce network transit traffic. 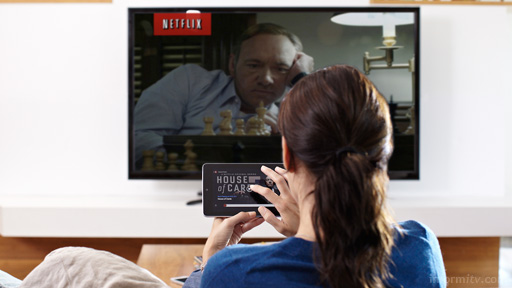 In February 2014, the average data rate for Netflix on Cablevision was just under 3 megabits per second, while for Comcast it was 1.7Mbps. It was about the same even for fibre services like Verizon FiOS and AT&T U-verse.

The throughput on some networks appears to have deteriorated, according to Netflix data. In October 2013 Comcast managed to deliver Netflix at an average of just over 2Mbps, slightly less than a year earlier, when Verizon FiOS achieved 2.2Mbps and AT&T U-verse managed 1.9Mbps.

Google Fiber tops the charts, with an average throughput of 3.7Mbps, although currently only available in some areas like Kansas City and Austin, Texas.

In Europe, customers currently receive Netflix at a higher average data rate than in the United States, although there are currently fewer of them. Netflix had 9.7 million paying subscribers outside the United States at the end of 2013 but is expected to roll out across more European countries.

In the United Kingdom, the five leading broadband service providers all deliver Netflix at an average of 2.5Mbps or more, with BT and Virgin both achieving over 2.8Mbps. Both of them are members of the Netflix Open Connect initiative.

The suggestion is that Comcast and other broadband service providers may not have the commercial incentive to ensure that Netflix customers receive a good service from Netflix, which competes directly with their own offerings.

Comcast has over 20 million internet customers and hopes to acquire Time Warner Cable, which has another 11 million.

For its part, Comcast points out that: “Providers like Netflix have always paid for their interconnection to the internet and have always had ample options to ensure that their customers receive an optimal performance through all ISPs.”

Comcast continued in its statement: “We are happy that Comcast and Netflix were able to reach an amicable, market-based solution to our interconnection issues and believe that our agreement demonstrates the effectiveness of the market as a mechanism to deal with these matters.”

Others have been more direct. On behalf of AT&T, Jim Cicconi, who is responsible for global public policy at the company, wrote: “As we all know, there is no free lunch, and there’s also no cost-free delivery of streaming movies. Someone has to pay that cost. Mr. Hastings’ arrogant proposition is that everyone else should pay but Netflix. That may be a nice deal if he can get it. But it’s not how the Internet, or telecommunication for that matter, has ever worked.”

Service providers in the United States may point to data that shows Netflix accounts for about 30% of their peak residential internet traffic so they expect services like Netflix to share in their costs.

Netflix observes that they do not share in the broadband service provider revenue, but why should they, when their ‘members’ are paying them a direct monthly subscription.

One might argue, as Netflix does, that consumers are paying for high-speed internet access and should be entitled to receive one, but the economic reality is that there is a cost associated with delivering services like Netflix ‘over the top’ of third-party networks.

It may not actually cost anything to deliver data but there are infrastructure costs involved in interconnecting networks.

This is not really an issue of network neutrality. It is a business issue. Broadband service providers may not be restricting Netflix traffic, but they do not necessarily have a commercial incentive to ensure the experience that Netflix and its customers might like.

Netflix currently pays companies like Cogent Communications or Level 3 to deliver its data. The question is whether they, or companies like Netflix, should be able to rely on mutual ‘peering agreements’ or should have to pay ‘transit fees’ to interconnect with broadband service providers like Comcast.

Providing broadband access can be relatively profitable for service providers and video offers a reason for customers to adopt higher tariff packages that have higher margins.

Yet where consumers have comparatively little choice in broadband providers, there are signs that companies like Netflix may be expected to pay a toll to deliver their online video service.

Commercially, Netflix simply cannot afford to allow customers to receive a poor service, irrespective of arguments about who should pay for the traffic.

Consequently, Reed Hastings has acknowledged that: “in the short term Netflix will in cases reluctantly pay large ISPs to ensure a high quality member experience”.

That may also have implications for other ‘over the top’ video service providers, which could upset the whole house of cards.