In response to a case brought by telecommunications company Verizon, the United States Court of Appeals has dismissed the authority of the Federal Communications Commission to impose net neutrality, or an open internet, which would require broadband providers to treat all internet traffic the same regardless of source. This could have significant implications for online video services delivered over the top of the open internet, in America and beyond.

The FCC had attempted to impose network neutrality regulation in its Open Internet Order at the end of 2010.

The Court of Appeals found that because the Commission failed to establish that anti-discrimination and anti-blocking rules do not impose common carrier obligations it has vacated those parts of the FCC Open Internet Order.

The full judgement runs to over 80 pages and provides the legal background to the matter, including previous precedents and the concept of a common carrier in common law, derived from the duties of those providing public transport services. 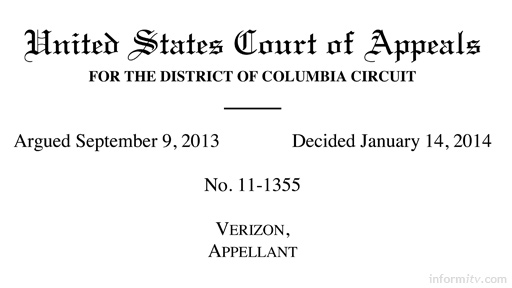 The FCC, faced with powerful lobbying from major telcos, appears to have relied on flawed legal arguments to establish formal net-neutrality rules in 2010.

The ruling could allow broadband providers in the United States to preferentially treat their own traffic, or discriminate against or even block access to certain services. It could even lead to content providers being charged for the data they deliver.

That could pose a problem for services like Netflix and others that deliver video over the top of third-party broadband networks and consume the majority of peak time internet traffic. Some services could end up paying for distribution, leaving others that do not at a disadvantage.

However, it may not be in the interests of broadband service providers to throttle online video services, since these provide a primary driver for subscribers to pay for faster broadband services, which is a relatively high margin business. They might even find some popular services demand payment for carriage, as they do for cable television channels.

The somewhat ambivalent response has been seen by some as a weakening of the position of the FCC on a commitment to an open internet.

The simple solution, according to Tim Wu, a professor at Columbia Law School who coined the term net neutrality, is for the FCC to classify broadband as a telecommunications service, giving it authority for regulation.

The ruling only applies to the United States, where the commercial interests of telecommunications providers exert a powerful influence on politicians and regulators.

In Europe the European Commission is pushing for a ‘Connected Continent’ that could include provisions for net neutrality. There is still a long way to go before this would be enacted in member states, although net neutrality legislation has already been passed in the Netherlands.

As drafted, the European proposals for net neutrality would still allow internet providers to offer consumers different levels of service and do deals with content providers to assure ‘quality of service’.

This is intended to allow telecommunications providers to generate additional revenues to finance investments in network upgrades and expansion.

Despite the idealism of some advocates for an open internet, the reality of market economics is that telecommunications companies and their shareholders want to see commercial returns for building out communications infrastructure.

The challenge for regulators is to ensure that these networks do not abuse their role.

Those seeking to build businesses over the top of broadband networks will need to ensure that, one way or another, they make an economic contribution to cost of delivering their services.

That could simply be by creating demand for consumers to subscribe to faster fixed and mobile broadband services. This facilitates all sorts of other public and commercial services that place lower demands on the network.

The problem is that if an online video business model is predicated on getting a free ride on the internet then someone will generally end up paying and one way or another that will ultimately be the consumer.

The full ruling on case 11-1355 Verizon v Federal Communications Commission is available from the Court of Appeal District of Coumbia web site.