Japanese companies have developed a 12.1-inch ultra-high-definition display module designed for high-end notebook computers and tablets. Japan Display Inc, a consortium that includes Sony, Toshiba and Hitachi, developed the prototype, which was presented at the FPD International convention in Japan. So what does this mean for the resolution of handheld displays and what are the implications for Ultra-HD screens? 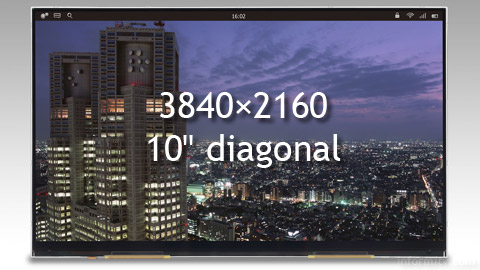 As informitv has previously observed, the benefits of ultra-high-definition displays may be more apparent on smaller screens that are viewed at close range.

So there may well be benefits in ultra-high-definition displays for smaller screens, particularly for text, graphics and photographic images.

Again, for comparison, an iPhone with a 4-inch ‘Retina’ display has a resolution of 1136×640 pixels, which is significantly less than even a 720p high-definition picture.

Viewing video on a tablet may not involve an inherent compromise, and may be a more personal, intimate and involving experience, like listening to music on headphones rather than what used to be called a “hi-fi” or “stereo” system.

This begs the question, if we want that sort of resolution on a smartphone or tablet, is high-definition really good enough for the living room display?

A 32-inch high-definition television has a display density of less than 70 pixels per inch, while on a 50-inch screen that falls to 44 pixels per inch.

Even without Ultra-HD programming, viewers will see the benefits of higher definition screens in higher quality graphics and vastly improved reproduction of digital photographs. Meanwhile, high-definition material can be scaled up to take advantage of the extra pixels.

No surprise then, that the latest speculation that Apple may come out with an Ultra-HD display. After all, it already sells screens 2560×1440 pixel 27-inch screens that considerably exceed the resolution of high-definition television.

In which case, informitv has long-expressed doubts that the illusive Apple TV screen will be a television. It would be more characteristic for Apple to reinvent television as a smart screen, without a tuner, that will create a new category of display and redefine our conception of television.