The BBC iPlayer is finally available on the Sky platform, accessible through the on-demand section of the electronic programme guide to anyone with a broadband-connected Sky+HD box. There are currently 6.7 million homes with a Sky+HD box in the United Kingdom, although only around 1.3 million have so far connected their box to their broadband router to enable On Demand services. For some, the availability of the BBC iPlayer on the Sky platform could be a reason to do so. The design represents a considerable compromise on the part of the BBC, which could have implications for on-demand services on other platforms.

Unlike other implementations, where the BBC has insisted on its own application, navigation and branding, the version on the Sky platform is based on the same template as the rest of the Sky services, including the on-demand offerings of other broadcasters. 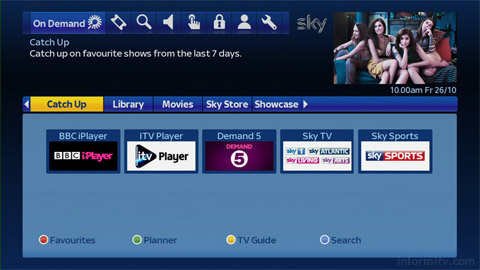 The BBC pages carry iPlayer branding and use the brand colour for navigation, but this is subordinate to the overall Sky+ user experience.

With similar services from ITV and Channel 5 already available, and Channel 4 to be added early in 2013, there will be a complete complement of catch-up services from the main public service broadcasters available on Sky, as well as programming from other channels including UKTV, MTV and Discovery, as well as movies on demand and “box sets” of drama serials. 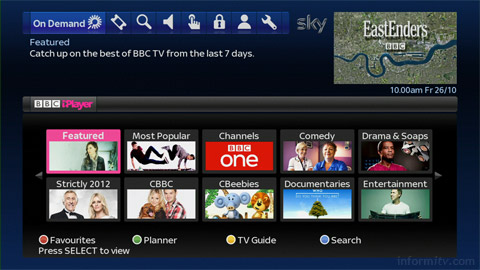 Viewers with a broadband connected Sky+ box are able to browse through BBC programmes available on demand by channel, day and genre. Regional and signed programmes are also available through dedicated categories, together with those in high definition. 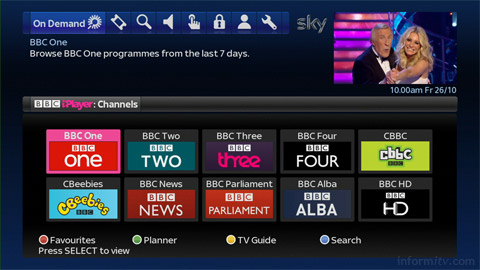 Within a channel, users can browse by programmes broadcast over the previous seven days. 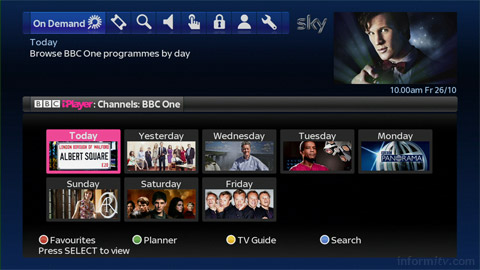 Missing at the moment are radio programmes, which are available through other instances of the BBC iPlayer, although the corporation has recently also launched a dedicated BBC iPlayer Radio app.

The mode of operation is also slightly different to other instances of the BBC iPlayer, in that once a user has selected a programme, it is progressively downloaded to their Sky+ planner to watch once it has started downloading or at a later time of their choice. Multiple downloads can be queued for downloading. In this respect it acts more like a backup to the personal video recorder for programmes that might otherwise have been missed. It also means that viewing programmes on demand, even in high definition, is less dependent upon the quality of the broadband connection and more consistent with the rest of the Sky+ user experience.

Both the BBC and Sky are claiming it as a landmark deal, although it is not entirely clear which has achieved the bigger coup. The BBC can now offer its programmes on demand directly to millions of Sky+ boxes across the country. Sky can offer BBC programming, which accounts for a considerable proportion of viewing in its subscriber homes, on its own platform, avoiding the need for customers to go elsewhere to find them.

Daniel Danker, the general manager for on-demand at the BBC explained: “By partnering with Sky BBC iPlayer is available on all major UK TV platforms at no extra charge, making sure our audiences can access the best of the BBC’s content at home and on the go, whenever and wherever they choose.”

Luke Bradley-Jones, the director of television products at Sky said: “We’re delighted to have partnered with the BBC to bring the best of the BBC on demand to Sky customers. Providing customers with the flexibility to enjoy their favourite TV on demand, our comprehensive catch-up TV service perfectly complements the genius of Sky+, which already helps millions of our customers take charge of their viewing.”

In many ways, the iPlayer on Sky represents an approach that the BBC has strongly resisted elsewhere — the aggregation of its programming within another platform offering. One might argue that is what Sky already provides through its platform in relation to BBC channels and that on-demand should be no different. The individual broadcasters still have their own distinct areas and channel brands, but the overall navigation is consistent across them.

The navigational experience is still rather slow and clunky, but it is quite functional and instantly familiar to millions of Sky users. It will be interesting to see whether Sky is able to offer a more fluid experience using its companion second screen applications, which have recently acquired the ability to control the Sky+ box and interrogate the planner.

YouView may superficially have a slicker interface, but Sky has an unrivalled selection of programming. For subscribers, access to BBC iPlayer programming through the standard Sky+ interface may be a welcome addition.

The significance of the standard navigation for the BBC iPlayer on Sky is that it undermines the argument that the BBC has long maintained that it needs absolute control of the context in which its programmes are presented on demand. Evidently the result is one of careful co-operation between the BBC and Sky, but it begs the question that if this is good enough for Sky then why not for other competing platforms?