There have been significant shifts in prime time television viewing over the last decade. Research from GfK on audiences in America suggests that while 56% of those aged 18-49 still use a television set in the hour from 8pm, only 64% of them are watching a television channel as it is broadcast, with 26% watching a recording and 7% viewing a programme or movie online. Only 42% consider a broadcast network in the top three channels they would turn to first, down from 52% in 2004.

Television time as a share of total media time has fallen, but this is as a result of new media options rather than an actual decrease in time spent with television. Time spent with radio, newspapers and magazines has decreased, while time spent online has doubled. 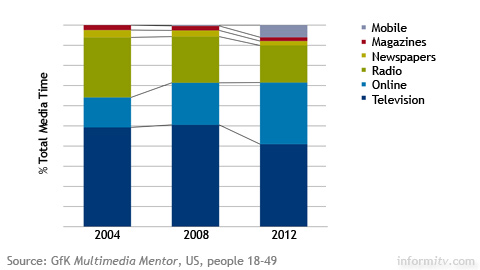 The primary ways in which most people find out about primetime programmes remain flipping channels and the electronic programme guide, although these methods were mentioned by only 38% of viewers, down from 49% and 45% respectively in 2004. Television promotion was mentioned by 19%, compared to 36% eight years before. Social media was a new source, accounting for just 6%, although together with word of mouth, programme listings and reviews, that could contribute to the 38% that “just know” when something is on, around the same number that reported this eight years previously.

Watching with others during prime time was reported by 59% of respondents, up slightly on the previous surveys. 70% of respondents said they selected the actual programme viewed during prime time, down from 87% eight years before, and only 44% said they pre-planned their viewing, the same proportion as previously. Switching during the programme was down to 30% from 47%, probably due to an increase in time-shifted and on-demand viewing.

The changes are not surprisingly most significant among Gen Y, generally speaking those who turned 18 after the turn of the millennium, sometimes referred to as millennials. In 2008, 82% of those of that generation using television at 8pm were watching a programme as it was broadcast. In 2012, the figure fell to 57%, with 40% taken up by watching recorded or online programming and the rest with playing video games.

Doing something else while watching television is nothing new. As in 2004 and 2008, three quarters of those aged 18-49 are engaged in some other activity while watching television in prime time. The percentage has increased only slightly from 75% to 78%. Eating remains the most popular activity, with 31% of respondents, while 7% admitted to dozing, napping or sleeping. Talking on the telephone has decreased slightly from 10% to 7%, while using the internet has increased from 8% to 19%. The new parallel activities are using a tablet at 5%, using a social media site at 9%, and using a smartphone at 20%. Reading printed materials was not reported, which may or may not be a surprise, and no-one owned up to anything amorous.

Among those who did not use a television set during prime time, use of the internet at that time has increased from 8% to 15%. Reading rose marginally from 5% to 6%.

The GfK research observes that “while the concept of ‘primetime TV’ may no longer hold for certain small audience segments, it continues to serve the vast majority of the television audience and will continue to command premium dollars due to that audience’s size”.

However, it notes that media companies should be thinking of primetime more as a concept — that time period during which people will always be looking to be entertained in the evening — than as a series of scheduled programmes.

It concludes: “While we wouldn’t recommend moving online and shutting down broadcast networks, we believe long term success will come to those who embrace alternative viewing options while still serving the large audience for traditional, linear primetime programming.”

The figures are based on the GfK How People Use Media: Primetime TV survey from The Home Technology Monitor, conducted in 2004, 2008 and 2012 using consistent methodology. Figures are based on people aged 18-49 in the United States. Sample sizes for the data cited range from 218 to 414.