Speaking at IBC, Daniel Danker, the general manager for on demand at the BBC, reconfirmed his belief in the red button to initiate interaction. He told the conference in Amsterdam “Red button is about to be transformed, by bringing TV and online together.” It is a theme he has been promoting for a while but it will be some time before most viewers are connected. Meanwhile, they may already be holding a connected screen in their hand but it probably does not have a red button.

He said that 20 million people a month use the red button in the United Kingdom, but during the Olympics this apparently rose to 32 million people. That is in a population of 26.3 million television homes and 57.5 million individuals over four years of age.

It should be noted that there is actually no way of accurately measuring the total number of people that press the red button on the remote. These figures may also include those that simply tuned to one of the 24 additional channels the BBC provided on satellite and cable for the Olympics, although the BBC contends that most of these came by way of the red button. It will be interesting to see whether the profile of the Olympics will encourage these people to use the red button in the future. 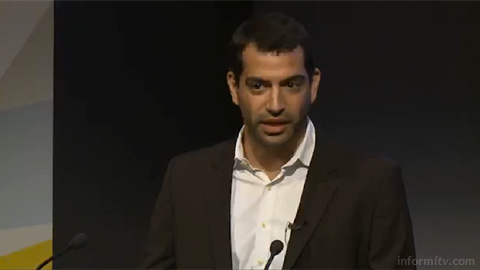 With responsibility for on-demand programming at the BBC, the former Microsoft man who joined the BBC in 2010, clearly believes that the red button will continue to provide a touch point for bringing television and online together. He calls it the “new connected red button” and he envisages that it will connect the broadcast channel with online services such as BBC iPlayer, on the new generation of broadband connected devices and displays.

The new “connected” red button prompt will be rolled out platform-by-platform in the coming months. Broadcast interactive services on digital terrestrial television are being reduced to a single stream, while broadband delivered services will offer more flexibility, for those that are connected.

“The next time you press red you’ll have incredibly easy access to a previous episode which happens to come over iPlayer, and not really know the difference between what is broadcast and what’s connected,” he said. “In essence TV becomes the menu. We think that’s an incredibly powerful and simple experience that everybody can understand.”

Quite how the navigation will incorporate access to news, sport, weather and other information, as well as the rest of the programming available through BBC iPlayer remains unclear. Previous versions of this viewer journey, through various interactive bars and bridges, have tended to be confused by the competing demands of various BBC departments. They will no doubt be further confused by the emergence of new connected platforms with other ideas about how to promote and present on-demand programming.

That is probably why the BBC is continuing to push the red button as a platform neutral way of selecting interactive services. Although it has fallen out of favour with some other British broadcasters, it is a paradigm that is being adopted elsewhere in Europe through the HbbTV hybrid broadcast and broadband specification. It seems that the red button will live on remote controls for a while longer, although it seems increasingly likely that for many control will migrate to a touch screen.

Furthermore, the BBC believes the red button will provide a point of connection on mobile and tablet screens, even though they may not have a physical red button, or in most cases many buttons at all, although of course, there could be a virtual red button on screen.

We have no idea how this will actually work, or whether it is what most people want to happen when they leave a room or turn off their television, even if this were technologically possible.

For the BBC, it seems, there will be no second screen experience for television, he concluded. “That’s why when we talk about the future of the companion experience, the future of bringing broadcast together with the internet, its about taking all of these screens making them part of an ecosystem but keeping it incredibly simple for the user.”

The danger is that while various vested interests compete to promote different interaction paradigms, viewers are already developing their own multiscreen experiences, with or without the involvement of broadcasters, who no longer have their undivided attention, if indeed they ever did.