The long-awaited Horizon television platform has been launched on the Dutch cable operation UPC Netherlands during the IBC show in Amsterdam. It will be rolled out in Switzerland, Germany and Ireland over the next 3-6 months. International cable company Liberty Global has been working with a number of partners on the ambitious project, which promises to transform the cable television experience for its customers, allowing them to view media across television, computer, tablet and smartphone screens.

“This is what our customers have been waiting for,” said Mike Fries, the president and chief executive of Liberty Global. They have been waiting a while but it may have been worth the wait. “Finally, you can enjoy the best cable TV programming on all of your devices whenever and wherever you choose.”

The Horizon media gateway has six tuners and can record up to four channels simultaneously. There is a three-hour review buffer that runs across recently viewed channels, from which users can also set recordings. The gateway box comes with a gigabyte of memory and a 500 gigabyte hard disk.

The user interface is slick and modern, providing navigation and recommendation of media across cable channels, on demand libraries, personal devices, selected apps and online sources.

In a live demonstration to informitv, a year after it was first viewed at IBC, the Horizon user interface appeared to deliver on expectations, with arguably the most ambitious next-generation television experience we have yet seen.

The television guide allows users to designate any number of favourite channels and display them in any order. 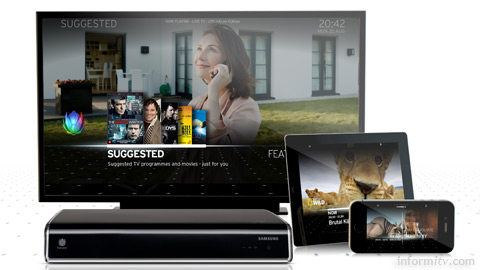 It will be possible to use an iPad as a remote control or as an additional viewing screen in the home. The user interface appears over the video. Users can also stream media from their computers, tablets and smartphones onto their television screens using DLNA.

UPC Netherlands customers will be able to order Horizon with packages from just under €55 a month, discounted for the first six months.

All UPC Netherlands customers with digital television and internet subscriptions will be able to watch 80 live television channels and access shows and movies on demand online, in and around the home, through personal computers or an iPhone or iPad app.

Liberty Global developed Horizon TV in collaboration with a wide range of partners. NDS, now part of Cisco, provides the middleware and user interface, based on their Snowflake framework, and managed by their Unified Headend, while Nagra supplies the conditional access and ThinkAnalytics powers the recommendation engine. Samsung produces the multimedia gateway, based on an Intel Atom CE Media Processor. Seachange powers the video on demand back office systems, while KIT Digital and Comcast subsidiary thePlatform provide the service platform and content management system.

Balan Nair, the chief technology officer of Liberty Global, recognized the contribution of NDS, now part of Cisco. “Over the course of this project we have worked with some outstanding partners to achieve an industry first, and through the provision of the key technologies and solutions for Horizon, NDS have been instrumental in enabling us to provide such an exceptional user experience for our subscribers.”

European cable has long lagged along with legacy systems. Virgin Media upped its game in the United Kingdom through its collaboration with TiVo. Liberty now faces the challenge of slowly upgrading its installed base of around 8 million television customers in Europe across disparate systems to deliver a next-generation multiscreen television experience.