Netgem, the French set-top box company, is promoting the concept of a multimedia cloud within the home, to simplify access to media on any screen. Dubbed nCloud, their software solution is to transform the set-top box into a multimedia server, able to deliver live television and video on demand to any connected device within the home.

The concept of the cloud generally refers to a rather hazy notion of storage and services that reside in the network. In the view of Netgem, that includes the home network.

The hybrid solution from Netgem uses existing modes of transmission to deliver live and on-demand programming to the premises, makes this available using internet standards within the home, together with other locally stored media. Unlike other cloud alternatives, such as Apple iCloud, personal computer based media centres, network attached storage solutions, or existing interoperability initiatives like DLNA, the Digital Living Network Alliance, the nCloud approach includes the distribution of live television channels to network connected devices.

The idea is that service providers do not need to invest in massive data centres or major network infrastructure upgrades in order to host programming in the cloud that will generally be consumed within the home. Netgem argues that the home cloud is more cost-effective and reliable, reducing the total cost of ownership for the service provider.

“We chose to use a hybrid system because we firmly believe that, consumers will become more and more cautious about sharing their personal data and guaranteeing privacy is a value-added service that operators can sell in to their customers,” explained Christophe Aulnette, the chief executive of Netgem. “Our architecture ensures the consumer can maintain full control over what he or she wishes to store online.”

Netgem has initially implemented an nCloud application for the iPad, which allows users to receive all the linear television channels available on their set-top box, alongside access to their own media.

“We started with the iPad as our first deployment of the nCloud to demonstrate the power of the solution and because we are convinced that tablets will become the new connected and mobile televisions within the home,” continued the Netgem chief executive.”Rather than having to download an application per channel, the user’s aspiration is to navigate on the iPad, by ‘flipping over’ channel to channel.”

In a demonstration seen by informitv, in addition to socially driven guide, the iPad application allows the user to move through channels with a page turn animation, which includes a still of the incoming video on the reverse of a virtual page. It is based on their own implementation of fast channel change technology. The flipping does not make changing channels any faster in practice, but it feels satisfying, although some might see channel zapping as symptomatic of a more general problem of deciding what to watch on television. 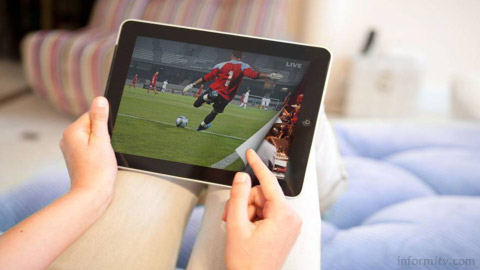 Monaco Television, an existing Netgem customer, will be the first to launch the nCloud system, through a software upgrade. As it moves to more of a software and services business model, Netgem may also be expected to offer nCloud to the French telecoms operator SFR, which has an installed base of around 3 million IPTV customers.

While the domestic cloud is a pragmatic solution for service providers, it does not necessarily address the delivery of media outside the home, and for some people this residential restriction may be rather limiting. It still does not address any need for users to back up their personal media to secure offsite storage. It also limits the role of the service provider and is open to competition from retail consumer electronics products, which as companies like Apple have demonstrated, can be very compelling to customers.

However, where the network connecting the home remains the main limitation of the connected home, the cloud media server may have a place in the domestic environment.