After an inauspicious start, the significance of Google TV could become apparent as a platform for connecting the worlds of the television, tablet and smartphone. The potential for Google TV should not be underestimated. Exactly a year after it was first announced, it was confirmed at the Google I/O developer conference in San Francisco that the platform will be updated to the latest version of Android, known as Honeycomb. Google TV will get access to the Android Market for applications, with a software development kit for building applications targeted at the television display.

The Google TV experience has been redesigned, based on in the initial response to the platform, which was largely critical. Google may still not really get television, but its approach is generally one of iterative improvement and the company appears to have learnt some lessons in the process.

Emphasising that Google TV is not a device but a platform, which can be seen as an extension of the Android environment for tablet and smartphone devices, Google is opening it up to developers to build support.

From this summer, existing Google TV devices can be updated to Android 3.1, or Honeycomb. Google TV will still support the Chrome web browser, but Android developers will be able to use the same tools to create applications for the television screen as they do for tablets and mobile devices. 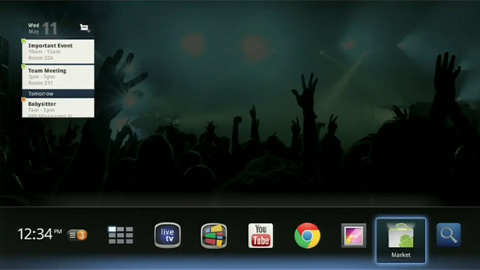 Of course, some changes are required for the television environment. Television is generally only viewed in landscape rather than portrait orientation and certain features, such as telephony functions, cannot be assumed.

Applications designed for the television will target a maximum logical screen display of 960×540 pixels, a quarter of the full high-definition screen resolution of 1920×1080 pixels.

Google is also now emphasizing the importance of navigation using simple up, down, left and right controls, rather than relying on a touchscreen or full keyboard.

Current applications will not be made available automatically to Google TV through the Android Market, but by configuring certain settings developers can gain access to such devices and the largest screen in the home. 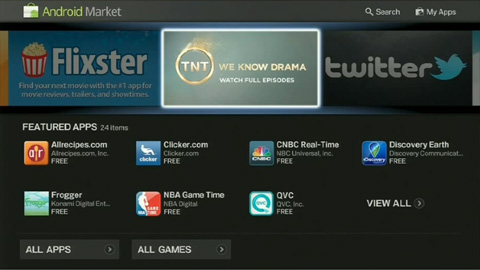 Developers will be able to preview how their applications work on television through the Honeycomb software emulator, and eventually through actual devices, some of which are already being made available in early release.

Search is still seen as important, but it seems that Google recognizes that users will require a richer range of interactions with their television. 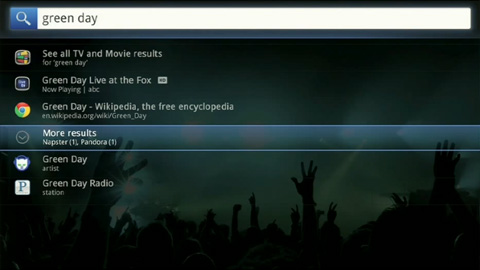 Google is releasing as open source the code for its Google TV Anymote remote control application for the iPhone and Android devices, together with details of the protocols by which devices can be paired and key and mouse events and web addresses can be sent to the television. Paired devices will also be able to query what channels are available for viewing and to tune to them. Further television functionality will be exposed through new application programming interfaces currently under development.

After launching the Sony and Logitech, Google is now also working with Samsung and Vizio. Google is hoping that television device and display manufacturers will adopt the open Android platform in much the same way as it has already transformed the mobile handset market.

Google TV remains very much designed by developers for developers, treating television as a large screen rather than a medium. Looking at those attending the Google I/O developers conference, one suspects that they do not watch much television, and are probably generally dismissive of it, when they are not downloading programmes to watch on their laptops.

Nevertheless, it will be the large pool of potential application developers that will no doubt transform our interaction with the television screen, many of them without even thinking of it as interactive television. It is this mindset that will change the television viewing experience.

The irony is that Android is based on Java, which was specifically designed to support applications such as interactive television, and which forms the basis of GEM, the Globally Executable MHP environment that is at the core of the OpenCable Application Platform tru2way and the BD-J platform for Blu-ray.

Android could yet succeed in providing an open middleware for the television where many previous initiatives have failed, even if it is no longer thought of as interactive television.

The key benefit that Android has in extending the software environment used for many tablets and smartphones lies in the opportunity to create new experiences that exploit these devices in conjunction with the television screen.

“The idea is that the there will eventually be a two-communication between what’s on your TV and what’s on your phone,” explained Rishi Chandra, the product lead for Google TV. “You finally start enabling complementary experiences on the phone and on the TV.”

The result will be a powerful ecosystem of devices that can compete with those of Apple and others. It may not be able to achieve the same level of compatibility as a more closed system, but an open environment will foster faster innovation. Many mainstream manufacturers will therefore gravitate towards Android as a de facto standard operating environment for enabling smart television experiences.