A new digital video recorder is about to go on sale in the shops in Britain, offering a combination of broadcast and broadband programmes, including video-on-demand services, with no ongoing subscription. The FetchTV Smartbox has been developed by IP Vision, which is backed by the French company Netgem. Providing access to BBC iPlayer programming on the television, it appears to offer the sort of service envisaged by the BBC Canvas project.

The combined Freeview and broadband video service for the first time offers viewers access to free digital television channels together with video-on-demand and catch-up programming on a retail basis, with no ongoing subscription. Unlike the BT Vision offering, it can be connected to any broadband service provider, allowing users to shop around for the best deal. 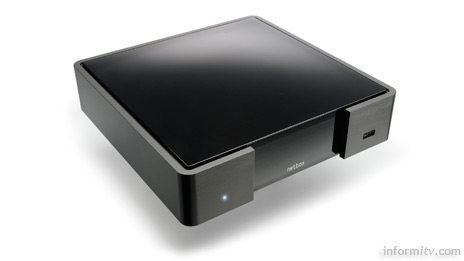 The Freeview+ accredited receiver has twin digital terrestrial tuners and a 160Gb hard drive, allowing users to pause and rewind live television and record programmes for later viewing. It also has a USB port that allows any programmes recorded from Freeview channels to be exported to an external drive. In addition, it acts as a home media centre, allowing users to view their own digital pictures and movies on the television.

A preproduction model of the FetchTV box was first seen by informitv at the offices of IP Vision in London back in January. The genesis of the project goes back some years and certainly predates the BBC Canvas initiative.

“We have known for a long time that our service had the capability to deliver content that has been traditionally viewed online to a TV screen,” said Eddie Abrams, the chief executive of IP Vision. “With the development of services like Canvas we know that content delivered via broadband will become more commonplace over the next few years. I am proud that we are able to lead the way and be the first to market with this technology.”

Earlier this year, on behalf of IP Vision he submitted a critical response to the BBC Trust consultation on Project Canvas. He wrote that “If Canvas was to proceed as planned, we believe that it would adversely impact both licence fee payers and existing industry participants, without advancing the BBC’s Public Purposes.” He went on note that “the BBC would be exposed particularly across a range of areas, including breach of competition law.”

IP Vision believes that the industry and the public would be better served by building on existing open standards, through bodies such as the Digital Television Group.

Previously available online, the FetchTV box will be sold in John Lewis stores for £219, with other retailers likely to follow.