SeaChange is bringing new applications to video-on-demand, on display at the Cable Show in New Orleans. The latest version five release of its Axiom platform adds online social networking features, bringing viewer ratings and recommendations to video-on-demand services, while also providing support to allow users to rewind broadcast programmes and enabling the real-time insertion of advertising.

Affinity is a social networking application that uses the internet to bring personalisation to video-on-demand on the television. It will work across the entire on-demand library of an operator, integrating the convenience of the web with the immediacy of the television experience. 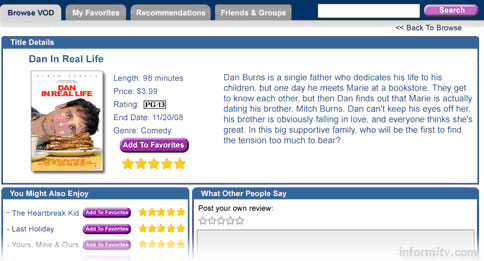 The Affinity web interface, which can be rebranded and hosted by network operators, lets subscribers use their personal computer or mobile phone to navigate around thousands of on-demand titles and customise their television experience according to their personal preferences.

Affinity offers automated recommendations and also allows subscribers to share their own searches, ratings and commentaries with friends and family through social networks such as Facebook.

ReStart TV will allow viewers to rewind, pause and re-start programmes from the beginning, seconds after they air on television. SeaChange says it integrates with major electronic programme guides and most digital set-top boxes, even low-end models.

Cable operators can determine their own time-shifting business rules according to their programming contracts. Running on Axiom video-on-demand infrastructure, it can run either in a standalone configuration for smaller systems or across multiple sites, controlled from one central location.

AdPulse allows dynamic and targeted insertion of advertising in real time before, after and during video-on-demand streams. Separating the advertising from the programming allows assets to be managed separately, enabling rotation and targeting of advertising, and updating commercials throughout a campaign.

“Our industry’s shared vision for on-demand television is for tens of thousands of movie and program choices satisfying every viewing desire,” said Alan Hoff, responsible for on-demand solutions at SeaChange. “We’re well on the way to that widespread reality, but even today operators aren’t getting the most out of their titles and subscriber satisfaction is at risk. SeaChange Affinity overcomes this threat by enabling operators to turn VOD into an individually managed and shared experience for every subscriber.”

“VOD’s well out of its infancy and we know first hand that operators intend to make it something much bigger and better,” he told informitv. “However, a big vision and depth of service can result in a few challenges. Growth is good, but you’ve got to keep subscribers happy with better, more web-like navigation. Affinity and ReStartTV are vastly different from what our industry has known, yet they reflect what’s happening globally, not just in the States. And frankly, they’re not a huge leap for operators.”