Zattoo, which is now offering live online streams of the leading British terrestrial television channels, is claiming it has the right to do so under the United Kingdom Copyright Act. Zattoo says it “operates strictly legitimately on the basis of agreements with broadcasters and the copyright law” but the British broadcasters say they have no agreements with the streaming startup company. The law seems ambiguous at best.

Zattoo issued a press release saying that it had extended its channel line up in the UK, showing all five UK terrestrial channels online via one media player for the first time ever. 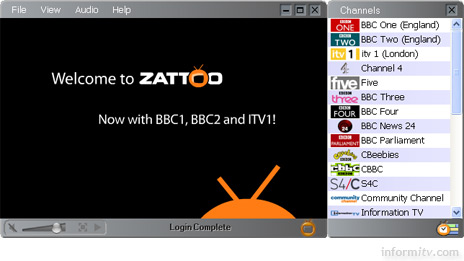 Zattoo now provides the England feeds for BBC One and BBC Two, the London feed for ITV and unspecified feeds for Channel 4 and Five. In addition, Zattoo carries other digital terrestrial channels, including BBC News, which it still lists as BBC News 24. It also carries BBC Three and BBC Four, as well as the children’s channels CBBC and CBeebies.

“We’re extremely pleased to be coming out of the test phase and launching in the UK with all the terrestrial channels,” said Alexandra Illes, the country manager for Zattoo in the United Kingdom, adding that the company had “set ambitious targets for the take-up of the media player in the UK”.

Alexandra Illes has been working with Zattoo since 2006. She started as a lawyer at the media and telecommunications group of Clifford Chance in London and went on to work in rights clearance. She now runs a consultancy called Illes Cross Media.

British broadcasters say that they have not entered into any agreement with Zattoo to carry its channels.

In a statement the BBC said: “We have not entered into any formal agreements with Zattoo to redistribute BBC channels”. ITV said: “We wouldn’t rule out third party deals, but there aren’t any in place at the moment”. Channel 4 said: “We don’t have any formal arrangements with Zattoo”. Five said: “The inclusion of the Five service on Zattoo has not been authorised or licensed by Five”.

However, Zattoo insists that it does not need to negotiate carriage agreements with broadcasters. “We work on the same legal rules as cable retransmission. We just take the signal as is, unaltered, and the laws do give special provisions for that,” Alexandra Illes claimed in an interview. “We don’t have agreements with all the channels, we are licensed in the law.”

Zatto said it has checked this with the media practices of two major law firms and with barristers.

“If you look at the UK Copyrights and Patents Act it sets special rules for the public service broadcasters. These special provisions were enacted to ensure the widest possible distribution. We have Swiss private investors, who would not invest if it was not on a fully legal basis.”

The copyright situation is complex, but the foundation for the assertion by Zattoo is unclear.

Section 73 of the 1998 Copyrights and Patents Act contains provision for the retransmission in a cable programme service of broadcasts made for reception within the same area provided it is not a satellite or encrypted transmission. The extent to which this may apply to a retransmission over the internet has yet to be tested.

Even if Zattoo could be considered under the provisions originally intended for retransmission over cable, it does not offer regional variations and may therefore exceed any such exemption for most of the country.

In the event that Zattoo were considered to be acting within the law it could open the way for other online services to retransmit their channels over the internet.

The irony is that in many cases the broadcasters themselves do not have the rights to make certain programming available online, as many agreements make a distinction between conventional broadcasting and internet distribution.

Although British broadcasters are understood to be concerned by the unauthorised carriage of their channels, it is curious that they have apparently not yet taken legal action against Zattoo to prevent this. It remains to be seen how long Zattoo will be allowed to continue with its present approach. Either way, it could set an interesting precedent.