NBC Universal and News Corporation have named their proposed joint venture video network ‘Hulu’. With most dictionary domain names already taken, Hulu will join the other neologistic nursery names that are being adopted for online video ventures. Ironically and paradoxically, it transpires that Hulu apparently means both ‘allow’ and ‘permit’ as well as ‘cease’ and ‘desist’ in Swahili.

Hulu is bid by NBC and News Corp to exploit the market for broadband video services. The name Hulu was chosen because it is short and easy to spell, according to Jason Kilar, the chief executive of the initiative. The joint venture was first announced in March, when it was known only as NewSite or Clown Co. 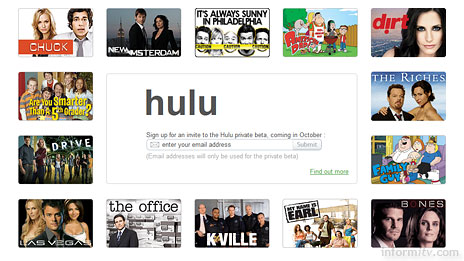 Hulu is now accepting requests for invitations to a private trial of the service that will be available in October. While the service is being established, programming will also be available through distribution partner sites: AOL, Comcast, MSN, MySpace and Yahoo.

iTunes
NBC Universal has informed Apple that it will not renew its contract to sell digital downloads of its television programmes through iTunes when it expires in December. It follows a dispute over the flat-rate pricing policy of $1.99 an episode pursued by Apple.

“It is clear that Apple’s retail pricing strategy for its iTunes service is designed to drive sales of Apple devices, at the expense of those who create the content that make these devices worth buying,” said NBC Universal representative Cory Shields.

Apple responded by saying that “Since NBC would withdraw their shows in the middle of the television season, Apple has decided to not offer NBC TV shows for the upcoming television season”.

Other American shows will finally be available on iTunes in the United Kingdom, albeit priced at £1.89 an episode. Shows are now available at 640×480 resolution, which is what passes for standard definition in the United States.