The BBC iPlayer is now available to the public as part of a wider test programme. Initial reactions are mixed, with some suggesting that it is too little too late. The BBC Trust has also announced a public consultation about the BBC web site as part of its first formal service review.

It is unfortunate that the BBC iPlayer is being made available at a time when the corporation is facing considerable criticism on many fronts. Having always been seen as an online pioneer, it is now in the uncomfortable position of catching up with other broadcasters that have already launched similar services. 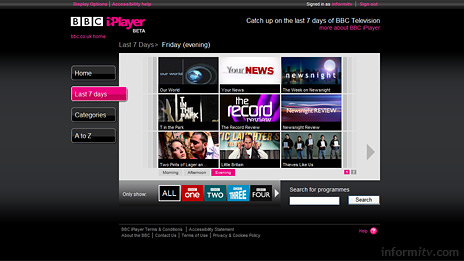 After more than four years, the BBC iPlayer is no longer the revolutionary development it once might have been. It was first envisaged long before the likes of YouTube were around, based on the observation that some users were already downloading programmes over the internet.

At the time, the BBC could simply have published online some of the programmes to which it had the rights for download in an open standard format using a peer-to-peer system such as BitTorrent. That would indeed have been progressive.

Instead, the BBC has adopted a proprietary digital rights management system from Microsoft and released a product that only works on the Microsoft Windows platform and not even the current version at that.

The reaction to this has been predictably negative. An overwhelming 80% of over ten thousand respondents to a BBC Trust consultation thought it was very important that the service was not limited to users of Microsoft software.

Over 13,000 individuals have signed a petition to the Prime Minister on the Downing Street web site to ask the BBC to provide the service for other operating systems.

The BBC Trust has asked for the service to be available on other platforms but has imposed no timeframe other than reviewing the situation at six month intervals. Last week they met with representatives of the open source community who expressed their concerns.

Apparently the Trust expressed surprise at the strength of feeling raised by the issue and promised to take it up with senior BBC management.

The real issue is not that the BBC iPlayer should be open source, but that it should be based on open standards as with conventional broadcasts.

The justification of digital rights management is that it is necessary to protect the interests of rights holders.

This is already the case with broadcast programming, since BBC channels currently carry no form of conditional access or copy protection and programmes can easily be digitally recorded off air.

Nevertheless, the BBC iPlayer is a significant step forward. The initial release is rather limited, with many of the promised features missing, notably integration of radio as well as television services.

Ultimately, the BBC is planning to publish many of its radio programmes as downloads without any form of digital rights management. This will establish an interesting precedent. It seems possible that if this proves successful, or at least not disastrous, that it could be an approach that is extended to some of its television programmes.

Service review
The BBC Trust is now inviting responses from the public to a consultation about the future of the BBC web site.

The Trust will look at the role and distinctiveness of the bbc.co.uk web site, how it is contributing to the BBC’s public purposes and the way it should respond to changes in user expectations and the web environment.

“The Trust must ensure that the BBC provides distinctive, high quality services to everyone in the UK,” said Patricia Hodgson of the BBC Trust. “This review will consider bbc.co.uk’s performance against the terms of its service licence and will assess whether the licence needs to be developed or changed in any way.”

Responses to the consultation can be made online at the BBC trust section of the BBC web site.