BT will wind up the Movio mobile television platform it launched less than a year ago. There has been limited consumer demand for the wholesale service which was only adopted by Virgin Mobile. Crown Castle is also shutting down its Modeo mobile television service in the United States.

BT has cancelled its contract with radio company GCap which provided the DAB digital audio broadcasting bandwidth for the service and is now considering the timetable for closure. It is also shutting down the Movio division that aimed to offer a wholesale service to mobile phone operators.

It is a further blow for Virgin Media, which was formed from the acquisition of Virgin Mobile by NTL in July 2006.

Virgin Mobile launched the mobile television service in October 2006. It was only available on a single handset, known as the Lobster, manufactured by HTC. It used Microsoft Windows Media to broadcast the five channel video service using internet protocol over a DAB digital radio network. 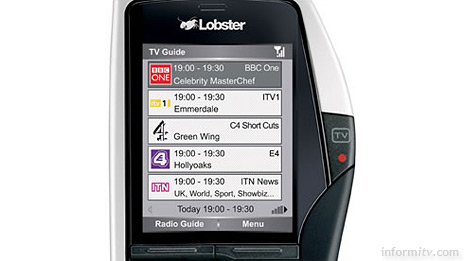 Many consumers complained that the handsets were unfashionably large and that the video quality was poor. After three months it was reported that significantly less than 10,000 customers had signed up.

BT blamed the failure on the lack of compatible handsets from big brands. It should have been apparent to anyone that tried to use the service that it was fundamentally flawed from the outset, not least because of the poor picture quality. The small images were displayed at a low frame rate, restricted by the available bandwidth on the digital radio platform.

The final straw came when the European Commission recently called on operators to back a single standard, DVB-H, which is based on the system used for digital terrestrial television used in Europe.

“Mobile broadcasting is a tremendous opportunity for Europe to maintain and expand its leadership in mobile technology and audiovisual services,” said Viviane Reding, the EU commissioner for the information society and media.

“Europe is today at a crossroads. We can either take the lead globally — as we did for mobile telephony based on the GSM standard developed by the European industry — or allow other regions take the lion’s share of the promising mobile TV market. ‘Wait-and-see’ is not an option. The time has come for Europe’s industry and governments to switch on to mobile TV.”

Modeo
Meanwhile Crown Castle is shutting down the Modeo mobile television service in the United States. The national spectrum will be leased to a venture formed by Telcom Ventures and Columbia Capital, with Crown Castle remaining as preferred provider of transmission infrastructure.

It leaves HiWire and MediaFLO as the only remaining mobile broadcast operators in the country. Like Modeo, HiWire plans to use DVB-H technology, whereas MediaFLO has a proprietary platform from Qualcomm that it is aiming to market worldwide.

It seems that the mobile television standards market will be contested between DVB-H and MediaFLO. The real issue is whether consumers actually pay to watch broadcast television on their mobile phone.