The Apple TV box is finally on sale and has met with mixed reviews. It generally attempts to do for video what the iPod has done for music, but no more. Nevertheless its interface sets new standards for a media extender.

The small sleek box is exceptionally easy to set up, although it comes without any cables as standard. It requires a display with either analogue component or HDMI high-definition digital inputs. The design is characteristically minimal, with no buttons or display and just a tiny remote control sensor and power light. 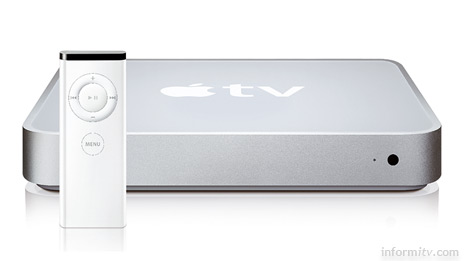 The power transformer is built-in, so there is no need for an external power adapter. The box runs quite hot but is virtually silent in operation.

The box includes built-in support for 802.11n wireless networking, compatible with earlier standards, as well as a wired Ethernet connection. Setting up the wireless network simply involves entering the password through an on screen keyboard.

As ever with Apple products, the attractive user interface is simple, intuitive and seductively easy to use. The tiny remote control has just six buttons and is the size of a small iPod. 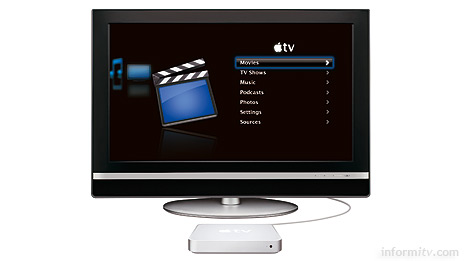 Apple TV requires a copy of iTunes software on a Mac or Windows personal computer. It will not connect directly to the iTunes store. Files can be synchronised from a nominated computer over the network. Media can also be streamed from up to five additional computers. It will not stream media directly from other sites, and that appears to include streaming internet radio stations. A nice feature is that playback can be paused on an iPod and automatically resumed from the same point on Apple TV.

The Apple TV will display 720p high-definition video but movies and television shows available on iTunes are currently limited to 640×480 resolution and fall far short of DVD quality. Technically, it is possible to play video in MPEG-4 or H.264 formats at resolutions of up to 1,280×720.

However, the supplied hard drive is currently only 40GB, of which only 33GB can be used, which is enough for music but a severe limitation for video. Enthusiasts have already successfully opened the box and replaced the hard drive, even installing their own software.

Inside is an Intel processor such that might be found in a low-end laptop computer and an nVideo graphics processor.

The Apple TV currently seems to fall short of being the “DVD player for the internet age” as it is claimed. Its supporting role may be in providing a television interface to music and video downloads as an extension of the iPod. But in terms of ease of use, it sets new standards.