A year behind schedule, Swisscom has finally launched its Bluewin TV broadband television and video service to compete against the dominant incumbent cable operator Cablecom. It comes as something of a relief after three years of trials and stressful testing.

Swisscom talks about its ‘triple screen’ vision of delivering video to the television, computer and mobile phone. The company says it is “embracing a new technological trend that will change the consumption of television content”.

The Swiss telephone operator was due to become the first in Europe to provide a commercial internet protocol television service using the Microsoft IPTV Edition software platform.

The launch was delayed by more than a year, after the chief executive of Swisscom admitted that the technology was not yet suitable. He said at the time that “high quality and full service provision take precedence at Swisscom”.

It seems that any problems with the Microsoft middleware and limitations in the set-top box hardware have now been resolved but the resentment remains.

“We have suffered a lot,” Ueli Dietiker, the chief executive of Swisscom told reporters. “We have helped to develop the Microsoft Internet-TV platform.”

Deutsche Telecom beat Swisscom to the rollout of the first services in Europe based on the Microsoft platform, but both come in advance of the launch of a broadband video service from BT in the United Kingdom.

While the German operator T-Com has emphasised a triple-play package, Swisscom says it is focussing on the new television viewing experience. That said, Swisscom has sensibly not placed premium content at the heart of its proposition.

At 29 Swiss francs a month, the Bluewin TV basic package covers over 100 regional, national and international standard-definition television channels and more than 70 radio channels. In addition, coverage of certain football and ice hockey matches will be available for purchase individually or by subscription. 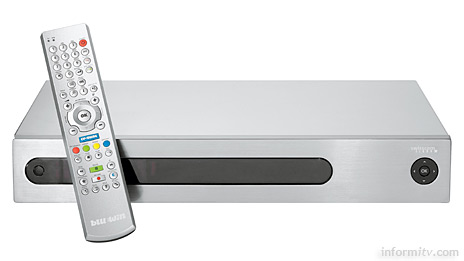 The Linksys set-top box offers a digital video recorder with a capacity of 100 hours. It comes with home installation for a charge of 95 Swiss francs. 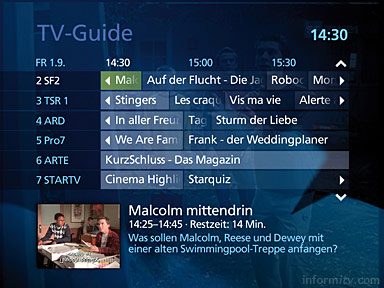 The user interface is based on the standard Microsoft design and it must be said it looks gorgeous. It is streets ahead of the average cable television offering, but nevertheless rather conventional in its model, which could be described as evolutionary rather than revolutionary. 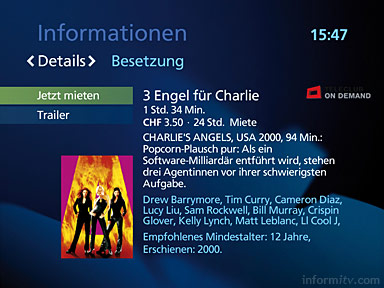 The EPG will also be available on a broadband portal and on mobile phones.

Bluewin TV is delivered over broadband, which is available to around 75% or 2.3 million Swiss households. Around 65% of the county has access to higher speed VDSL broadband. They will be able to receive two simultaneous channels, enabling one programme to be recorded while watching another.

Homes with ADSL access will only be able receive a single channel at a time. Swisscom says that continuous upgrading of the networks with VDSL will increase coverage and bandwidth, aiming at 75% coverage by 2010, reaching speeds of 10Mbps to 30Mbps.

Swisscom has also announced a trial of DVB-H mobile television with three providers in the city of Berne. The trial is being conducted with Swisscom Mobile, sunrise and Orange using Nokia handsets.