The Deer Channel provides video of deer on demand for under a buck a day. Allowing subscribers to watch live deer from their point of view, it is the latest example of a niche online video subscription service, accessible to a global audience.

The Deer Channel provides video of deer on demand for under a buck a day. Allowing subscribers to watch live deer from their point of view, it is the latest example of a niche online video subscription service, accessible to a global audience.

For just under a dollar a day it will offer big bucks and the chance to see rutting from a unique perspective –from cameras and microphones mounted on their heads.

“See and hear deer sparring, rubbing, scraping, feeding, bedding … from his point of view!” the web site for the Deer Channel proclaims. 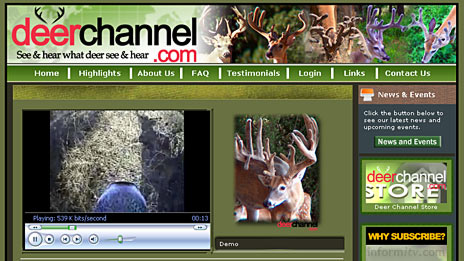 Real-time broadcasts will apparently begin soon for an introductory subscription of $299.95 a year, against a regular price of double that.

For the less committed deer enthusiast there will also be a weekly pay-per-view show featuring edited highlights for just $3.99.

Despite any superficial similarity to an adult web site, this is a serious scientific endeavour.

Based on a 1,500 acre ranch in north central Texas, it is the long-time dream of whitetail deer enthusiast Tom Brooks, the president and chief executive of Deer Channel Inc, a wildlife research organisation dedicated to encouraging the management and conservation of deer. Chief technologist is Patrick Seaman, who helped launch Yahoo! Broadcast.com.

DCI’s mission is to create, distribute and market the world’s most respected, scientific, successful and entertaining wildlife programming presented on demand across multiple platforms.

“Back in 1999, we started kicking around ways that we could learn something more than what still deer photos or remote triggered video cameras provided,” says the web site. “It occurred to us that the best way to see and hear what deer see and hear would be to develop a proprietary, non-invasive audio/video camera system.”

Today they have a patent pending wildlife camera system, with an entire working ranch committed to the study and conservation of deer, complete with a broadcast studio.

The online service, currently in beta, will employ up to ten cameras in the field, included deer-mounted devices, providing up to three live feeds, plus a fourth stream of edited highlights.

“Having a state-of-the-art video camera and microphone mounted on the head of a trophy whitetail is the closest thing yet to ‘being’ the animal,” according to Gordon Whittington, editor of North American Whitetail, a magazine ‘designed for the serious trophy hunter’. “I’m especially intrigued by how big bucks react to other deer and predators, and this system lets you observe those interactions — in real time. Amazing!”

There is doubtless a market for deer video-on-demand. North American Whitetail Television is already available on The Outdoor Channel on cable and satellite.

Programming such as the Deer Channel provide a prime example of the niche video possibilities of broadband video and IPTV services.