If you think that high-definition and surround sound are the latest thing, then think again. Ultra High-Definition TV has a resolution that is 16 times that of HDTV and has 24 channel sound. The result is an immensely immersive experience.

Developed by NHK engineers at the Japanese Broadcasting Corporation, the Ultra High-Definition TV System is also known as Super Hi-Vision or SHV. It has four times the number of scanning lines used for HDTV, with four times as many pixels across, giving an image of 7680×4320, or 32 megapixels.

In comparison, high-definition television has only 2 megapixels, less than many compact stills cameras, while ‘HD Ready’ screens may display even fewer pixels.

The SHV system, which was previously seen at the 2005 World Exposition in Japan, was on display at the IBC trade show in Amsterdam. Currently envisaged for theatrical exhibition, as well as other applications such as in medicine, it could be some time before it is used for broadcast purposes.

Uncompressed signals are sent over fibre optic links, while MPEG-2 has been used for programme distribution at 200-640 Mbps via experimental satellite transponders or IP networks, making it one of the most demanding IPTV applications seen to date. 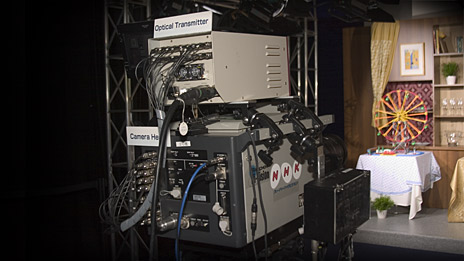 If a resolution of 32 megapixels seems rather exotic to the traditional television industry, it is worth bearing in mind that a high-end stills camera used by many professional photographers, similar to the one used to take this photo of the prototype video device, may have a resolution of up to 16 megapixels. Hasselblad already has a camera with a 39 megapixel sensor.

Such photographic cameras are designed for print reproduction at A3 and above, which provides an impression of the resolution of the Ultra High-Definition TV system. In effect, it offers print resolution images. 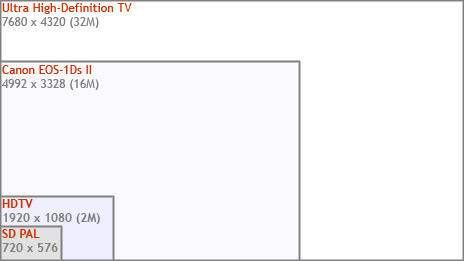 Another way of thinking about it is a high-definition display with a 16x zoom. This was demonstrated to good effect with a live street scene displayed on a high-definition monitor, which could be panned across and zoomed into, revealing incredible levels of detail.

While the pixel structure is effectively invisible, there were some image artifacts, and even at a 60Hz progressive frame rate some motion effects were perceptible in pans and fast movement.

Nevertheless, seen on a cinema-size screen, the effect is immersive, encouraging the viewer to explore the scene as if it were real. The illusion is supported by a 22.2 multichannel sound system, with three levels of loudspeakers providing three-dimensional sound.

If anything, this is where digital cinema needs to be heading. It is the video equivalent of IMAX, creating a superb sense of spectacle. It demonstrates that there is still some way to go in the development of television and audio-video technology and that high-definition is only a relative term.

NHK expects to see experimental broadcasts around 2015, with consumer equipment available around 2020 and broadcasts in 2025. If the pace of technological progress continues, it could be with us much sooner than that.