Universal Pictures, part of the NBC Universal media group, is for the first time releasing new movies as digital downloads to own, through a partnership with the Lovefilm online service in the UK.

Although independent films have previously been offered for download over broadband, it will be the first time that users can legitimately download and ‘own’ a movie from a major studio. 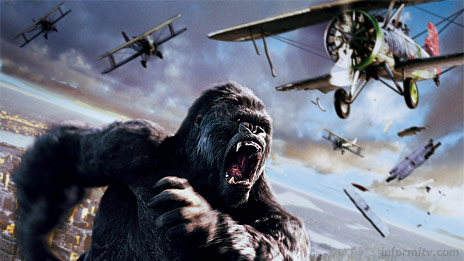 The new service will launch with the blockbuster King Kong as one of an initial collection of 35 movies, selling at £19.99, with older titles selling at £9.99.

Lovefilm, a leading online DVD rental service, also operates the online movie service for AOL in the UK. The company currently provides a limited selection of movies for download, offering films from Warner Brothers and independent distributors on ‘rental’ basis, with the licence for downloads expiring after a week.

In the case of Universal films, the downloads will not expire. Consumers will be able to download selected movies in two formats, one for a computer and one for a portable device. They will then also receive a DVD in the mail.

“It gives instant access, it gives portability and it gives much greater flexibility for the consumer to consume his product any way they want,” said Eddie Cunningham, the chairman of Universal Pictures UK.

Eventually all 6,500 titles in the Universal back catalogue could be made available.

If the launch goes well in the UK, it could be extended to other markets, and other studios could be encouraged to adopt the model.

Mark Livingstone, the chief executive of Lovefilm, said he expected Warner Brothers and other Hollywood studios to follow the lead of Universal.

The downloads will use Microsoft digital rights management, which means that they can only be viewed on compatible devices, which does not include the Apple video iPod or Sony PlayStation portable, and they cannot be copied to DVD.

Delivering a digital download in conjunction with a physical DVD enables the studio to protect a premium price point, and no doubt some consumers will pay for the privilege and convenience of being able to view a movie on their computer or portable media player as soon as it is released on DVD.

Research apparently suggested that consumers were far more likely to download a movie if they also received a physical copy on DVD.

Hollywood studios are beginning to look beyond physical product as their primary source of revenue and are increasingly exploring and experimenting with new distribution models.

Amazon is reportedly in discussions with major studios, including Paramount, Universal and Warner Brothers, regarding a digital download service.

The risk is that such services could cannibalise existing business by eating into traditional retail revenues, but in the long term, as the music industry has demonstrated, digital downloads could become a significant and more profitable revenue stream.