Announcing annual results, Sky reported total revenue for the year to the end of June of over £4 billion, up 11%. Operating profit increased by 34% to £805 million, a margin of 20%. The average revenue per user is now £384.

The relatively modest rise in the overall number of subscribers, in the face of strong competition from Freeview, was in line with expectations, but apparently failed to excite investors.

Over 300,000 customers signed up for the satellite service in the last three months, but taking into account those that also left, the net number of additions was just over 80,000. The annual churn rate is 10.3%, slightly above the target of 10%, but slightly lower than the 11.1% previously reported.

The number of homes with more than one Sky box increased by 82,000 in the quarter to 645,000, compared to 293,000 the previous year. With an average of 2.9 television sets per home, 8% of customers now have a multiroom subscription, with that number projected to rise to 30% by the end of the decade.

Income from Sky Active fell from £162 million to £92 million, following the closure of the SkyBuy retail service and the expiry of a number of interactive contracts and services. Underlying interactive revenues rose 10% to £87 million, reflecting growth in areas such as interactive advertising, games and third-party betting and gaming.

SkyBet produced £261 million in revenue over the year, a 37% increase on the previous year. Apart from subscription charges, revenue from betting is now second only to that from advertising. However, the costs associated with SkyBet also increased, to £236 million. 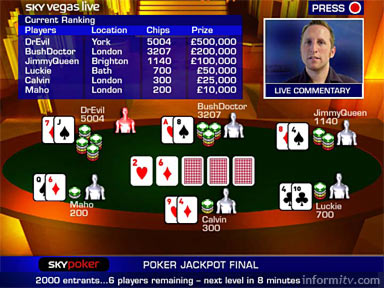 When the Gambling Act 2005 comes into effect, it will allow gaming services of chance and skill, in addition to the fixed odds games already available on SkyBet. Sky plans to launch a second Sky Vegas channel, with poker, roulette and other card-based games. “The interactive television service is really where we see a lot of attractive growth,” James Murdoch told analysts.

James Murdoch is the son of Rupert Murdoch, who chairs News Corporation, which owns over a third of BSkyB. His older brother Lachlan resigned as a News Corp executive last week, and their has been speculation that James is now positioned eventually to take over from his father.