Ian Valentine of Sky Interactive, tells informitv that the new Sky e-business portal could stimulate the interactive television sector and offer new opportunities to both businesses and broadcasters.

Around five hundred prospective publishers and developers attended the launch event, eager to learn more about a new, cost-effective, open standard platform that potentially allows anyone with a web site to have an interactive television presence.

Apparently, the idea of employing internet compatibility on the Sky platform had been in the pipeline since the around the year 2000, and had been in development for some time.

“The actual project itself has been in development internally with Sky for nearly two years now in terms of the core infrastructure to support this.” 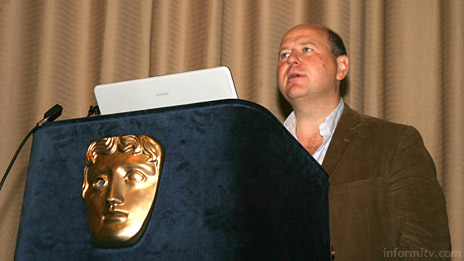 Ian Valentine, who is technical alliances director at Sky Interactive, pointed out that it had always been part of the thinking since the beginning of Sky Digital to provide an e-business platform, although for various technological and commercial reasons it never really materialised.

“I always hoped that we were right in our thinking that interactive TV would be embraced by the e-business community, rather than just the broadcast community.”

Given the level of response to the announcement of the e-business portal, he is confident that demand will exceed initial expectations.

“I think what it shows is a latent demand in the industry to embrace the platform for these purposes, so long as it meets their requirements for openness and standards, and that’s really what’s changed. Hopefully we’ll see much more commitment form the industry going forward.”

The site registration system has been designed to be an automated, self-service operation, significantly simplifying the process of getting on the Sky platform.

Ian anticipates that the development will provide a stimulus to the interactive television sector, with opportunities in the future to link from other applications to content within the portal.

“The red button is going to get more fresh, there are going to be more interactive advertising opportunities, there will be people wanting to use bandwidth for clever things, and really this is a catalyst for it and hopefully it will not just be a success on its own but freshen up the whole interactive offering that we have a Sky.”

He describes an example scenario in which the editor of an interactive news application can link to a charity or a donation site within the portal from a story that they are covering.

“The portal is the first step to get people onto the platform. That’s the hard step. Joining the dots and linking up the launch points is easy because it is only a matter of creating the links and transitions, not creating the actual destinations themselves.”

Is there a danger that these different interactive services may diverge, or at least not converge?

“No, absolutely not. As soon as you’ve got content that everyone wants to link to and mix together, then you end up with much more interoperability than you have at the moment. I think that this will act as a catalyst for a large majority of content to be based in a common technology with a common link model, and a common way of interoperating between broadcasters.”

So, does he see this as re-invigorating the interactive television sector?

“Absolutely. We’ve had people approach us with tools and with skills that have got very excited around interactive TV, and then gone bust, or given up, simply because there’s not enough work and not enough destinations. So this is going to give to the industry a reason to do interactive TV design again, a reason to make Sky micro-browser compatible products, and that has to be a good thing.”

In theory, in addition to the tools that partners have already announced, the platform should be accessible to anyone with web skills.

“If people are comfortable with HTML, and if they have a smattering of WML, they can pick up WTVML very quickly.”

But some might say that this is a step back in time, using an analogue modem to deliver web services on TV.

“Yes, it is a bit retro, but in another sense, it satisfies a need. We’re adamant that sites should be designed and efficient on the TV, and give a good consumer experience. I think we’ve taken a very significant first step today because the content is definitely going to come, there is definitely a demand for it, and therefore we can begin to look at ways to improve that as we go forward. So it’s the beginning of a journey.”