Locast has suspended its online television service in the United States, following a court ruling, a year after the four main American networks filed a lawsuit against the nonprofit platform, which relays local channels over the internet. Locast, founded by lawyer David Goodfriend, says it is a story of legal theory, activism, and determination. It is considering its options.

The Locast service started in New York in January 2018. It subsequently expanded to 32 designated market areas containing 55 percent of the population of the United States.

Locast claims that 3 million people used Locast to access local television, including many who could not afford cable and are unable to receive local stations with an antenna.

Locast did not charge for its service, but requested a voluntary donation of $5 a month, to suspend regular video donation requests on its service, which interrupted programming every fifteen minutes for fifteen seconds.

Direct payments from users contributed $4.37 million of $4.52 million in revenue in 2020. The actual cost of providing the service was reckoned to be $2.5 million.

Locast argued that it qualified for exemption from this requirement under a provision of the Copyright Act of 1976 that allows nonprofit translator services to rebroadcast local stations without receiving a copyright license from the broadcaster.

The court ruled that “Locast made far more money from user charges than was necessary to defray its costs of maintaining and operating its service”.

The court held that the law enacted in 1976 allows secondary transmissions by nonprofit organizations if they receive no “commercial advantage” and do not charge users anything more than what’s “necessary to defray the actual and reasonable costs of maintaining and operating the secondary transmission service.”

The judge ruled that Locast does not qualify for that exemption because it uses payments from viewers to fund its expansion into new geographic markets.

The Locast web site says that the service was “from the very beginning designed to operate within the strict letter of the law, but in response to the court’s recent rulings, with which we respectfully disagree, we are hereby suspending operations, effective immediately”. 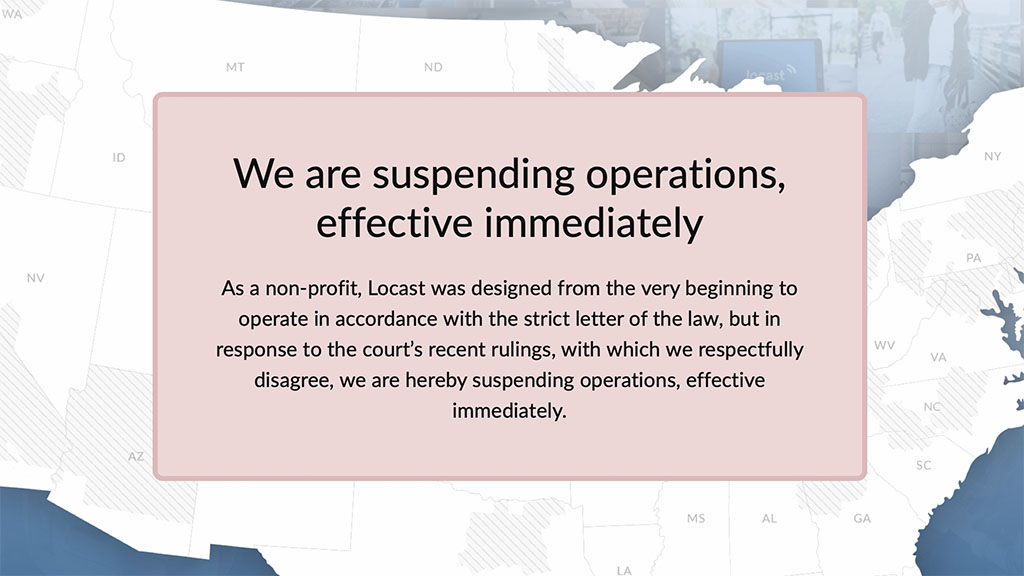 The Electronic Frontier Foundation, which supported Locast in its legal defence, said: “The court interpreted the law in an artificially narrow way. Congress wrote copyright’s nonprofit retransmission exception to make sure that every American has access to their local broadcast stations, and expanding access is exactly what Locast does. This ruling that nonprofit retransmitters can’t use viewer contributions to expand access will do the opposite of what Congress intended.”

The law firm representing Locast said that that its client is evaluating the decision and formulating next steps.

At stake is more than the right to relay local channels over the internet. The broadcast networks have become used to receiving large sums for the retransmission of their channels over cable networks. The last thing they want is for their signals to be relayed without a licensing agreement, which would set a dangerous precedent.

Asking viewers for a monthly payment and using revenues to fund expansion may have been a strategic error. This may not be the end of the road for Locast. Lawyers will be watching developments with interest.