All five public service broadcasters have come together to show a promotion across 21 channels simultaneously to celebrate the role they play in the lives of viewers. Our Stories was shown at the same time across the channels of the BBC, ITV, Channel 4, and Channel 5. The collaborative and co-ordinated approach to promotion aims to reach over half of the adult population of the country. It comes as the nation slowly emerges from lockdown, amid complaints about plans to charge millions of pensioners for television licences for the first time in two decades.

The two-minute promotion has the message ‘our stories are your stories’ and represents the way that broadcasters echo lives across the country. It shows a series of everyday environments mixed with recognisable locations across the country, with screens showing iconic clips from popular programmes appearing in incongruous contrasting settings. The narrative avoids national nostalgia and is surprisingly sombre and low key in mood. 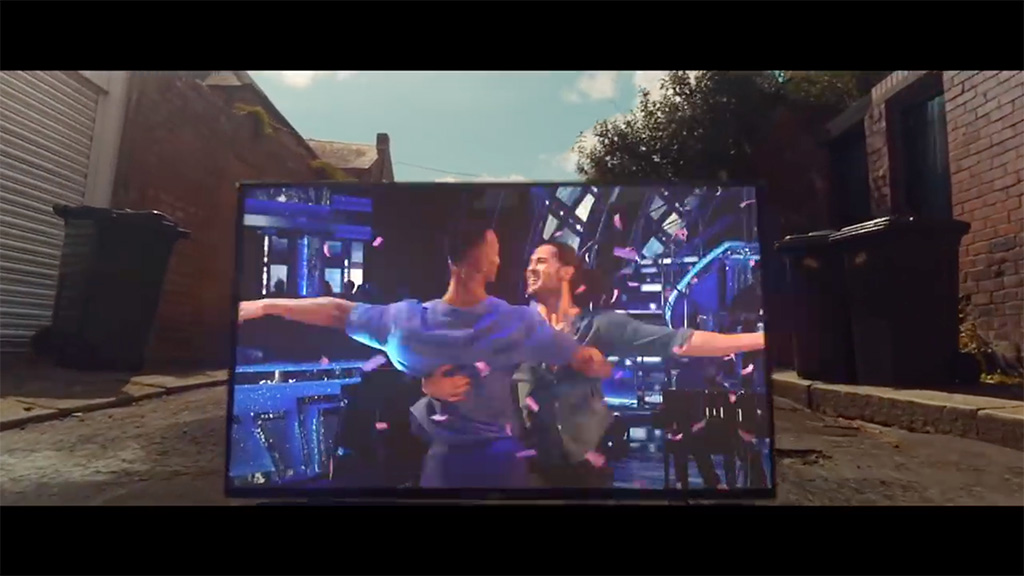 The narration intones: “Who can tell us the story of us? What tells us more about who we are than a dream, a kiss, or a tragedy? What makes us more at home than a pub, a street, or a school? Stories change things, help us see the world differently. This is our story, our tears, our smiles, our truths. This is the story of everything we’ve done. And everything we could be. This is us. This is who we are. And our stories are your stories.”

The promotion was shown simultaneously in an unprecedented ‘roadblock’ across BBC One, BBC Two, BBC Four, ITV, STV, Channel 4, S4C, Channel 5, and a dozen other associated channels in peak prime time. It will also be shown in shorter spots across all channels throughout the month.

“British free to air television — commissioned from the UK and produced in the UK — is here for everyone,” said Tony Hall, the departing director general of the BBC. “We bring people together for the big moments – from a royal wedding to the World Cup. We are there at times of crisis and to provide comfort, laughter, education and entertainment. We do something special for the UK and provide authentic British programmes that our rivals simply don’t offer.”

The chief executive of commercial broadcaster ITV noted: “Our mission is to tell stories that reflect the diversity of life today in our nations and regions. We aim to engage with viewers from all walks of life. From the excitement of our big entertainment shows, to the power and creativity of dramas and soaps to the depth and breadth of our documentaries and national and regional news and sport, our focus is reflecting a full range of experiences, bringing people’s lives centre stage and providing insight into how we see ourselves as well as how we look out into the wider world.”

“Channel 4 has a unique role to play in public service broadcasting — we were created to challenge the status-quo and in doing so tell the stories that otherwise may not be told,” added Alex Mahon, the chief executive of Channel 4. “This film is an incredible celebration of British storytelling and the beautiful, harrowing, funny and necessary stories we collectively share with the audiences we serve.”

Ben Frow, the director of programmes at Channel 5, said: “At Channel 5, viewers are at the absolute heart of every show we make, with a diverse and expanding range of programmes – from drama to documentaries, entertainment to the extreme world. We are proud to be part of this united campaign celebrating the role the BBC, ITV, Channel 4 and Channel 5 all play for the nation.”

The promotion was commissioned from independent agency Uncommon Creative Studio, which pitches itself as a “building brands that people in the real world actually wish existed”.

The promotional message for public service broadcasters comes as the nation slowly emerges from lockdown. A rise in viewing during the peak of coronavirus restrictions has fallen back to just over 10% up on the previous year, although considerably lower than five years ago.

The BBC will end the provision of free television licences for most households with someone aged over 75, following a two-month delay because of the coronavirus pandemic. From August, only those on Pension Credit benefit will be exempt from the compulsory charge of £157.50 per household. The BBC estimates that up to 3.75 million more households will need to pay.

The government had contributed the cost of licences for those aged over 75 from the year 2000 but responsibility for the provision was passed to the BBC as part of its last licence fee settlement.