The 100 leading television services in the informitv Multiscreen Index gained 3.46 million subscribers between them in the first quarter of 2017, an increase of 0.79%. In the same period in 2016 the increase was 6.90 million, or 1.68%. There were modest gains across the board, with the Americas up by 0.85 million, Europe, Middle East and Africa up by 0.21 million, and Asia Pacific gaining 2.39 million.

46 of the 100 services in the index reported net subscriber gains. The 10 with the largest gains added 3.58 million between them.

Some of the greatest gains were as a result of reporting changes made by AT&T for PanAmericana and Sky Brasil. Organic quarterly gains were 1.13 million lower.

The top 10 services in the United States reported total losses of 559,000 subscribers, with only Comcast reporting significant gains.

AT&T reported the largest loss, with 233,000 fewer subscribers for its U‑verse service, while its DIRECTV subsidiary reported no change and did not report numbers for its DIRECTV NOW online offering.

Leading operators in India gained at least 1.67 million subscribers between them, led by SITI, which added 800,000. 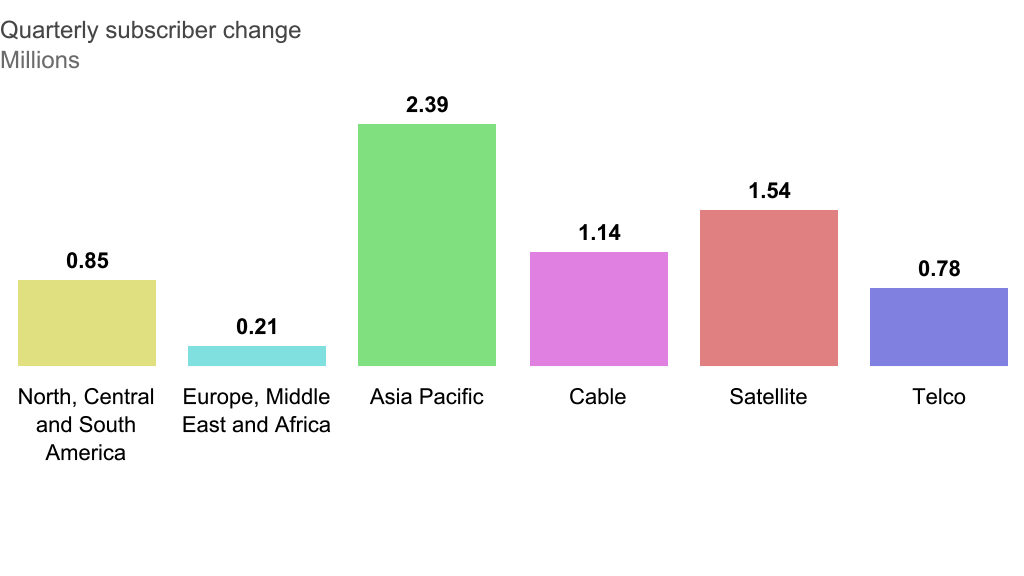 “Figures for the first quarter show the lowest rate of worldwide subscriber growth we have seen,” said Dr William Cooper, the editor of the Multiscreen Index. “There is still growth in the Asia Pacific region but at a lower rate than previously.”

“95% of homes subscribing to the services in the Multiscreen Index have access to services that can be viewed on a screen other than the traditional television,” noted analyst Dr Sue Farrell. “97% of services in the Americas now offer a multiscreen service.”