TVPlayer, an online television service available in the United Kingdom, has launched an online package of 25 premium channels for just under five pounds a month. The bundle includes Discovery Channel, National Geographic Channel, Cartoon Network, British Eurosport, HISTORY, Lifetime, and Gold, in addition to over 60 channels available at no cost.

The premium package is available with no setup fee and no contract for an introductory price of £4.99 a month, for as long as users stay subscribed. A seven-day trial is also available. Subscribers can watch anywhere in the United Kingdom, in or outside the home, across up to three devices, including their computer, mobile, tablet or Samsung Smart TV.

An internet connection is required but unlike some services, it is not tied to a phone line rental.

The subscription service is an add-on to TVPlayer, which launched in late 2013, backed by online video company Simplestream and comparatively modest venture capital investment.

The TVPlayer platform is also available on a white- label basis to platforms and operators outside the United Kingdom. 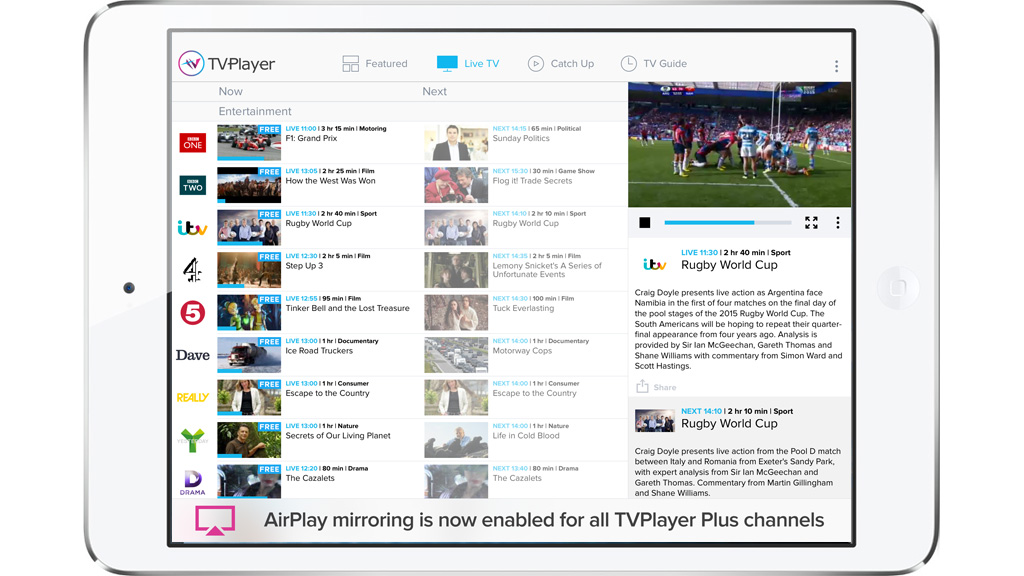 “TVPlayer is a popular online TV platform used by over half a million UK users every day. Many of these haven’t had access to pay TV before,” said founder Adam Smith. “TVPlayer Plus is a great option for viewers who want lots of choice without being locked into a contract, offering the latest must-see TV on 25 channels you won’t find on Freeview.”

TVPlayer Plus is available on iOS, Mac and PC. It will also launch on Samsung Smart TVs and will soon be available on Android devices and Amazon Fire TV.

The move to including a selection of premium channels is part of trend towards offering so-called ‘skinny’ bundles at lower price points.

Sky NOW TV offers a range of online channels in various bundles starting at £6.99 a month. These include recently released movies, premium sports and entertainment channels.

The TVPlayer Plus selection of channels is currently more limited but may suit those that want a little more than available on the free channels at a low monthly cost.

The apps are reasonably slick, with an illustrated programme guide for the current and following programmes on each channel and a seven-day planner.

Significantly, some of the premium programmes are available on a catch-up basis, making them much more watchable.

It is notable that this comes from an independent company focussed on online video, rather than a consortium of broadcasters.

Freeview and Freesat are rather more concerned with maintaining the traditional broadcast model. Their apps allow users to browse the programme guide. The Freesat app also integrates with the television service. Viewers are still tied to an aerial or a dish.

Neither platform allows users to stream programmes to their smartphone or tablet, although this is supported by the separate players from their respective shareholder broadcasters.

Being able to view programmes on any screen, over the most appropriate available delivery network, is surely the future of television. If not, what is?