TiVo showed a network digital video recorder at the International CES in Las Vegas. It is understood to be on trial with several operators, including Virgin Media in the United Kingdom. TiVo also revealed the tendency of subscribers to stream to second screens and the extraordinary extent of ‘binge’ viewing.

Virgin Media, now part of Liberty Global, is reportely engaged in small-scale trial of the TiVo network digital video recording capability. Other operators are also piloting the platform, which TiVo plans to roll out commercially later in the year. Com Hem in Sweden and ONO in Spain could be candidates and there is also reportedly interest from cable operator partners in the United States.

Service providers can set their own business rules, including whether there is shared storage for programmes or whether separate copies must be recorded on request. The system can record several days of viewing, by network or programme, and rights permitting allow indefinite storage. Operators can determine whether to disable trick-play functions during playback and there is the opportunity to splice in targeted advertising.

Support for 4K resolution is also on the roadmap. TiVo expects to support 4K on new retail products as well as future hardware distributed by service providers and software that it ports to products from suppliers such as Pace.

Joshua Danovitz, the vice president of innovation at TiVo, said: “TiVo is once again defining the landscape of how viewers will consume entertainment, and how pay TV operators provide the best in class user experience.” 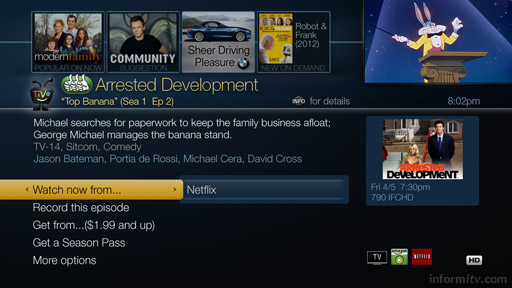 The TiVo NDVR will extend the TiVo experience to other devices. TiVo says this is an important next step for operators as they consider a transition to programming delivered over internet protocols, enabling them to use low-cost client devices and consumer provided smartphones and tablets, while enhancing the user experience.

Since the launch of TiVo Roamio in August 2013, subscribers have been able to stream shows to second screens. Over three-quarters of subscribers with the capability have been streaming to their mobile devices at least once a month, on average streaming more than 15 sessions a month, mainly to tablets.

TiVo also revealed research showing the extent of ‘binge-viewing’ among its subscribers. Nine out of ten recently watched three or more episodes of a programme on a single day. One in four hour-long television programmes and one in five half-hour programmes was viewed as part of a ‘binge’ session.

Drama series are the most popular programmes where multiple episodes were watched in a single session.

Survey results show that this form of viewing is a lonely habit. More than half of bingers report never or rarely binging with others. The main reason for binge viewing is “to catch up on missed episodes,” followed closely by “to improve the viewing experience and maintain continuity”.

As more programming becomes available on demand, the need for personal digital video recording, whether in the home or in the network, may diminish. This is particularly true of drama series.

The ability to pause and time-slip live programming will remain important. Network recording will also facilitate viewing across multiple devices, in or out of the home, rights permitting.

With network recording, service providers will have more control over the delivery of adverts. How they choose to exercise that control will be critical to determining the viewing experience, on whatever screen it is seen.