Subscription services will be the fastest growing revenue stream, rising from $1 billion in 2010 to $6 billion in 2013 and up to $13 billion in 2018. The forecast projects that the number of homes paying a monthly fee to receive subscription video-on-demand packages will rise from nearly 68 million by the end of 2013 to over 160 million in 2018. 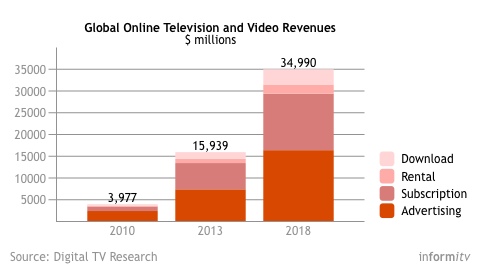 The move to subscription services, popularised by services such as Netflix, will eclipse the pay-per-view or rental market and the download-to-own model, with total revenues forecast to be in the region of $5.6 billion in 2018.

Online TV and Video Forecasts is available from Digital TV Research. It includes profiles of the main content providers and platforms, with 40 country summaries and forecast tables to 2018.