Quiptel, a five-year-old start-up company, claims it has an online media platform that improves the user experience of streaming audio and video while making more efficient use of available network bandwidth. It is a bold claim, which acting chief executive Richard Baker tested at a low key launch in a London hotel.

Invited media and analysts were shown multiple high-definition streams over a modest broadband connection. It appeared to work well in the demonstration, with rapid media start up a notable feature, said to be three to six times faster than conventional online video approaches, although they had problems earlier in the day when the hotel apparently lost its network access.

The patented technology appears to be based on using multiple logical network routes and a network overlay that intelligently manages traffic to optimise use of available access network bandwidth.

The result, Quiptel claims, is that more of the available network capacity is used to deliver sound and pictures, while operators can serve more customers with equivalent infrastructure.

Quiptel says its approach means an operator can deliver up to 30% more streams than HTTP Live Streaming for the same capacity. Some of the claims are documented in a detailed technical white paper that benchmarks QMP QFlow against Apple HLS. It says that HLS involves more overhead bandwidth above the bitrate for the audio and video.

However, given the increasing capacity of connections and falling connectivity costs, the assumed savings may be less significant than potential improvements to quality of service, particularly over constrained connections or in congested network conditions.

What Quiptel appears to be doing is adding multipath connections to optimise delivery over diverse network routes.

It is an approach that is familiar to informitv from its groundbreaking work with Livestation, a pioneer of live peer to peer streaming.

In principle it can provide more robust delivery in changing network conditions. In theory that is inherent in internet protocols, but so-called overlay networks can add more intelligent routing that can optimise distribution dynamically.

One of the challenges is that requires more intelligence to be built into the player application. Quiptel has clients for multiple operating systems including personal computers and iOS or Android devices and they can also be embedded in smart televisions, set-top boxes or media players. Quiptel showed an end-to-end system using an Android set-top box.

Quiptel is aiming to offer QMP, the Quiptel Media Platform, to service providers on a white label basis or as a licensed technology. 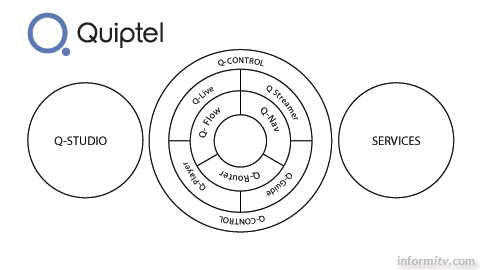 The company is based in Hong Kong. The founder is Peter Do, who previously worked with voice over internet protocol systems. Just as VOIP services, of which Skype, now owned by Microsoft is the best known, have disrupted traditional telephony by enabling audio and video over broadband networks, so Quiptel hopes to allow a premium media experience over either managed or unmanaged networks.

“It provides a greater than 50% capex and opex saving for service providers over traditional IPTV systems, enabling a quicker time to market while expressly focusing on quality of service video delivery.” he said.

Quiptel faces a challenge in deploying its approach with service providers that have already made technology choices but could provide an advantage to those looking to roll out new services.