Global on-demand revenues from movies and television programmes will reach $6 billion in 2018, a 44% increase over 2012. That includes video on demand from cable, satellite and telco operators but excludes revenues from sports and adult programming, subscription video on demand and online television and video services. As Digital TV Research reports, it still only accounts for less than 3% of pay television revenues, forecast to exceed $200 billion 2018.

The United States is estimated to have accounted for 37% of global on-demand television revenues in 2012, but this will fall to 30% by 2018, despite revenues growing from $1.53 billion to nearly $1.76 billion.

North America and Western Europe together accounted for 73% of global on-demand television revenues in 2012, but will comprise just over 60% in 2018, with significant growth coming from Asia Pacific, Easter Europe and Latin America.

The figures are from the latest On-Demand TV Revenue Forecasts report from Digital TV Research.

IDATE meanwhile reports that global television revenue will increase from €358.3 billion in 2012 to €483.9 billion in 2017. It observes that linear television will continue to generate over 90% of video market revenue. IDATE suggests that video on demand will have 7% of the total video market by value in 2017, worth €6.6 billion, compared to 2% for physical packaged media, worth around €10.3 billion, while subscription video on demand will be worth €2.2 billion.

The IDATE figures are from their World TV & New Video Services Market study and database.

To read much of the published opinion about the future of television one might imagine that it is largely determined by the United States, and to an extent it is. The North American market is worth €133 billion, accounting for 37% of global revenue. 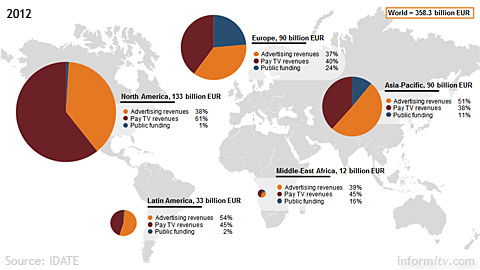 So the market outside North America is worth €225 billion. Europe is worth €90 billion, as is the Asia Pacific market.

These figures remind us that traditional television is still big business and is growing rapidly in developing economies.