Grabyo is a new television clip-sharing platform that allows viewers to clip their favourite moments from a programme as they watch and share them on Facebook and Twitter. Developed by the team behind Showcaster, an interactive television platform used by a number of broadcasters, it has been launched with Britian and Ireland’s Next Top Model on Sky Living, with the support of the sponsors of the show.

The clips incorporate promotional messages and advertising, allowing sponsors to extend their association with the show to the social conversation, in this case by promoting hair care products. 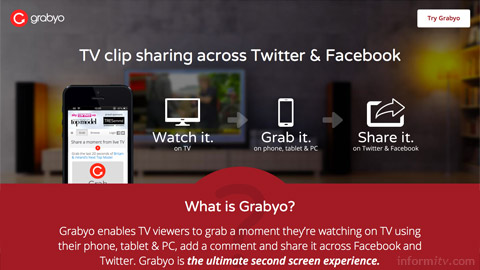 The platform records the programme by agreement with the broadcaster and produces clips on request in real time.

Users do not need to download an application and it works however they are watching television. They simply go to the web site, select the programme and click to record a clip, which can then be instantly shared through a link on social networks.

Conceptually it could work with any television programme or platform, although of course there are always issues around rights. Arguably it could be covered by fair use, although practically it requires support from producers.

Whether users will tolerate heavy sponsorship of clips is another matter. It seems that many of the clips were shared by those associated with the project and most of them received relatively few views. Yet the concept has potential, if it can achieve scale.

The commercial applications are obvious, perhaps a little too obvious, but there are also promotional possibilities for public service broadcasters like the BBC.

With the rapid adoption of smartphones, the use of video clips to communicate seems likely to increase.

Notably, apps like Instagram, acquired by Facebook for a billion dollars in cash and stock in 2012, now enable sharing of short video clips as well as static images.

Broadcasters now have the opportunity to embrace and exploit the ability of viewers to create virtual clips of programmes. One day it may be as easy to share a clip of a programme as to tweet about it.