Twelve years after the first multistream interactive television coverage of the Wimbledon tennis championships, the BBC will be delivering an unprecedented 10 live streams during the two-week tournament, accessible online, on mobile and through connected televisions. Yet only up to three additional streams will be available through the red button for viewers on satellite and cable television, with just two on terrestrial television, one in high definition. Meanwhile some matches will be shot in 4K ultra-high-definition, although most people will not see the results.

The online service will offer up to 10 live streams, as BBC sport delivers more coverage of Wimbledon than ever, accessible on personal computers, tablets, smartphones, games consoles and connected televisions, streamed in high definition where possible.

Meanwhile, the red button will offer coverage from just two additional courts to viewers on Freeview, YouView and BT Vision — one in high definition, the other one in standard definition.

Notably, YouView will offer nothing more than Freeview, despite being designed as a hybrid broadcast and broadband platform. It will apparently not even support the BBC Sport app designed for connected televisions.

Viewers with certain connected television sets will be able to use the app, available on more recent models from LG, Panasonic, Samsung, Sony, Toshiba, and on the Sony PlayStation 3 and the TiVo box from Virgin Media. 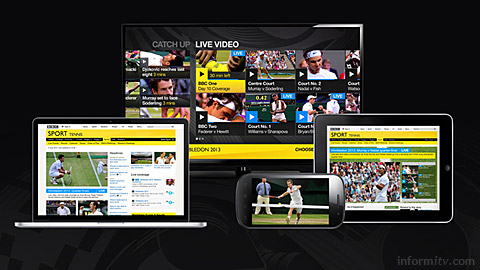 “One of the challenges we have been grappling with over the past months and years is how to get the right amount of capacity for BBC Red Button broadcast video streams,” writes Alix Pryde, the director of distribution at the BBC. “The reason why there is only one additional SD stream on DTT rather than two is that unfortunately there isn’t the capacity available in the market to do more.”

At least the streams will be listed as channels in the electronic programme guides, allowing viewers to tune to them directly or record them for later viewing.

However, it appears that ongoing negotiations between the BBC and Sky had yet to be resolved just days before the event to enable the listing of the red button high-definition channel on Sky.

While viewers can now watch Wimbledon in high-definition, it seems that traditional television viewers will have access to less coverage than a decade ago, while those viewing online will have unrivalled choice, provided their broadband connection is up to it.

To emphasise the point, the Wimbledon channel on YouTube will for the first time have “exclusive access” with “key moments of the tennis, interviews, behind the scenes and press conferences throughout the Wimbledon fortnight”.

This year will also be the first time that Wimbledon will be shot in 4K ultra-high-definition, as part of a joint project between the BBC and Sony. Some of the matches will be shot in 4K and replayed on site in a special “experience zone”.

4K seems to be surpassing 3D in the quest to add an extra dimension to coverage. The BBC and Sony tested 3D in 2011 but there is no mention of it this year.

Higher resolutions and faster frame rates promise more spectacular coverage in the future, but for the moment distribution remains a challenge.