British commercial broadcaster ITV has launched a new version of the ITV Player app for Apple devices, with the option to subscribe for £3.99 a month to watch programmes from the last month without advertising. Paying to avoid adverts may seem unlikely but it is a plausible proposition. So would you pay a pound a week to avoid adverts?

Users can continue to catch up on programming with commercials, including a simulcast of the ITV and ITV2 channels for free, or they can upgrade to access programmes without advertising and also receive ITV3 and ITV4.

James Micklethwait, the online product director at ITV said: “As part of ITV’s ongoing transformation plan, a key priority for the online team is to drive new revenue streams by exploiting our content across multiple platforms, and the launch of the ad-free ITV Player app is a further step on that journey.”

The ITV Player has received over 7 million downloads to Apple devices to date. The quality of the ITV Player offering is improving, to the extent that it is now watchable. 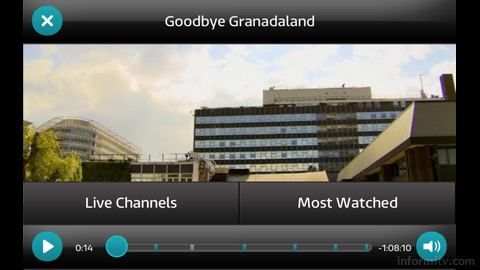 “It is important we deliver innovative business models and adapt the product to the evolving market,” said Steven Power, the product manager for ITV Player on mobile. “We’re the first commercial broadcaster to offer viewers the choice to watch content with or without advertising.”

In fact, Sky viewers have been able to use watch ITV programmes without commercials through the catch up service at no extra charge for some time, although that is probably a ‘feature’ rather than by design. Programme parts segue seamlessly without so much as a promo. Of course people can also avoid adverts by timeshifting and skipping through them, and many people do, although industry figures suggest that this is not as prevalent as it seems.

It does seem that advertising is more intrusive and irritating when viewing on demand, especially if it is not possible to skip and the commercial is irrelevant or is being shown repeatedly. Some might argue that viewers will simply not tolerate the advertising load currently applied to programmes on the ITV Player. Whether upselling them to pay to avoid them will work is another matter.

So will people be prepared to pay £3.99 a month for the convenience of watching catch-up programmes on their iPad or iPhone without commercials?

It is an interesting question for informitv, which has long predicted that people will indeed pay to watch programmes without advertising.

The problem is that most people currently only watch relatively few programmes on demand compared to hours of broadcast television. It is not clear that the lure of ITV3 and ITV4 sufficiently adds to the offering, since no one seems quite sure what they are for.

The main tent poles of the ITV marque channel are live talent shows that really demand to be watched live or not at all, except perhaps as clips on YouTube. So the value proposition may not be that great.

Where the model might work would be for a consortium of broadcasters, for instance the shareholders of Freesat, Freeview or dare we say YouView. In which case a modest charge to avoid adverts for programmes viewed on demand might be more compelling, at an appropriate price point.

ITV is effectively valuing its viewing at £3.99 a month, or a pound a week, per subscriber. Presumably 30% of that goes straight to Apple.

In the first three months of 2013 the net advertising revenue for ITV was £382 million and across 2012 it was just over £1.5 billion in total. Across 26.5 million television households in the United Kingdom that gives ITV an advertising revenue of £4.75 per home per month.

So in theory a subscribing home could pay ITV £4.75 a month to opt out of all advertising on all ITV channels and the company would be no worse off. If everyone in that home watched all ITV programming on demand through the same £3.99 subscription they would effectively be up on the deal and ITV would lose out. Except of course this is unlikely.

Total television advertising in the United Kingdom is worth around £3.6 billion a year, so the same household could theoretically pay less than £12 a month to watch all television channels without any advertising.

So a world in which people pay to watch television without advertising is plausible, although it seems unlikely that most channels would risk losing out on lucrative advertising to pursue a purely subscription proposition.

ITV is trying desperately to increase the proportion of non-advertising revenue that it receives. The income from those that upgrade their apps to subscribe monthly is likely to be a drop in the bucket, but it indicates that ITV is prepared to pursue progressive models. Commercial television without commercials would once have been unthinkable.

Indeed the turnaround at ITV seems to be as much about confidence as any substantial change in business model. The ITV share price has recovered spectacularly over the last four years to its previous form, as investor sentiment has improved.

The company has a confident on screen identity and is making programmes that people actually want to watch. The key question is would they pay a pound a week to watch the ones that they may have missed? If so, could other channels follow suit?